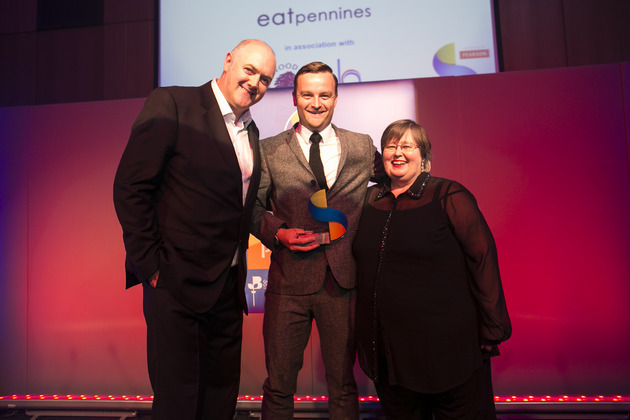 A Bury social enterprise business called EAT (Employment and Training) Pennines Ltd, that is the training arm of the  Eagle and Child pub in Ramsbottom, beat off stiff competition from other organisations from across the region to win a Greater Manchester Skills for Business award in the social enterprise category.

In the midst of the recession, Glen Duckett took a boarded up pub, closed for 18 months, and developed an award-winning gastro pub that trains and employs disadvantaged young people.  The company tracks its social impact and supports the local economy and community. They have even created an ‘Incredible Edible beer garden’ developed from derelict waste ground and now landscaped with a polytunnel, hens and beds.

Frustrated by the highest levels of youth unemployment since records began and few opportunities for young people, Glen established Eagle and Child and EAT Pennines using his own investment.  Since October 2011, 20 disadvantaged young people have been supported into training and employment, with 80 percent retention in education, employment or training with EAT Pennines or another employer.  Glen runs the two businesses together and each supports the other.

Glen and his team have also recently been awarded the catering contract at Heaton Park by Manchester City Council following a competitive tender.  Part of the City Council’s five year regeneration plan, EAT Pennines will train and employ at least 60 young people from disadvantaged backgrounds at their new site at The Stables.

Glen Duckett from EAT (Employment and Training) Pennines Ltd said:  “I wanted to demonstrate a pub social enterprise model, tackling youth unemployment and providing training to support disadvantaged young people into sustained work .  We are committed to building a culture of leadership across the organisation to ensure the staff develop their confidence, capabilities and coaching skills to support themselves and others.  The company sources produce and labour locally, delivering an excellent food offer and great service.  We have demonstrated you can run a great business as a social enterprise.”

Rachel Shorrock from Greater Manchester Chamber of Commerce said:  “Glen Duckett has achieved impressive recruitment and retention rates.  EAT Pennines is an accredited training centre, delivering learning from bases in Ramsbottom, Bury and Manchester. The company successfully tackles youth unemployment and provides training to support disadvantaged young people into sustained work. The fact that this company has doubled turnover in two years tells a story of success and secures EAT Pennines as the winner in this category. ”

In total 70 Greater Manchester organisations or individuals were shortlisted in 17 categories.
The jury panel comprised of some of the region’s most notable representatives from the learning and skills sector including Councillor Sue Murphy, Deputy Leader and Executive Member for Employment and Skills at Manchester City Council; Mike Blackburn, the chair of the Learning and Enterprise Partnership in Greater Manchester and Regional Director for BT; Rachael Beasley, FE Work Based Learning Account Manager at Pearson Work Based Learning; Paul Holme, Skills Policy Advisor at New Economy and David Teale, Chief Executive of North of England Excellence.