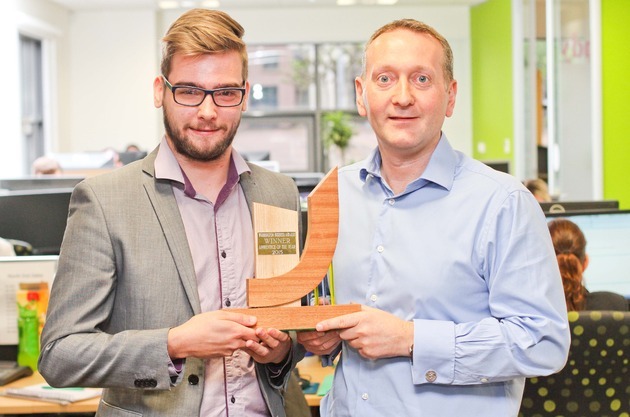 Warrington firm Optionis has launched a fresh apprentice recruitment drive, after one of its trainees scooped an award.

The professional services group is looking to hire a further 10 apprentices in its payroll and accounts departments.

Optionis’ hiring spree follows the success of its 23-year-old trainee Lewis Haworth in the apprentice of the year category at the Warrington Business Awards.

Lewis, who was nominated after triumphing in Optionis’ internal apprentice contest earlier this year, received his award in front of 500 guests at Lymm Rugby Club in Cheshire.

Judges were impressed by Lewis’ achievements at Optionis, including:

> Being selected for a secondment to a more challenging and varied role, and performing so well that the secondment became permanent

> Twice making the shortlist for the Optionis employee of the quarter award, which is open to around 350 staff members

> Mentoring and training a university graduate who joined his department, freeing up valuable time for his line manager

He said: “I’m really chuffed to have won – I still can’t really believe it. Just being nominated was great.

“Looking to the future I would like to develop my skills, complete my accounting qualifications and rise through the ranks here at Optionis.

“My advice to other young people thinking of doing an apprenticeship is to go for it, and give it everything you’ve got.”

Derek Kelly, group managing director at Optionis, said: “We’re all extremely proud of Lewis. His achievements demonstrate the value that our apprentices bring to our business.”

Optionis was recently named as one of England’s top 100 apprentice employers.

They are entitled to the same benefits and perks as all other employees, such as free parking and gym membership.

Email recruitment@optionis.co.uk or call 01925 644865 to find out more about the group’s current apprenticeship vacancies. More information is available at www.optionis.co.uk/careers.

Lewis Haworth: case study
Having gained A Levels in subjects including Maths and IT, Lewis studied Music Production at university before leaving after his second year in order to pursue a career in accountancy. After starting out in the Optionis Group’s ClearSky division, he was asked to move across to the group finance department in January 2014 – initially on a three-month secondment to help out during a busy period.

The switch, which saw Lewis take on a more complex and varied role, became permanent due to the quality of the work he produced and the way in which he settled into the team. He is due to complete his AAT Level 3 qualification, along with his two-year apprenticeship, this summer. At this point Lewis hopes to secure a permanent role at Optionis and begin working towards chartered accountant status.