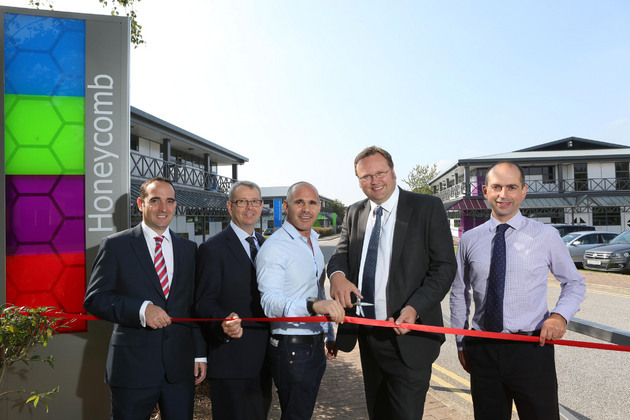 A Jersey-based entrepreneur has chosen Chester as the first UK mainland location for his brand of Honeycomb office suites.

Honeycomb Chester features accommodation for up to 15 small and medium-sized businesses, and was officially opened this week by Chester MP Stephen Mosley.

Two businesses have already signed tenancies and will move in over the coming months.

Planning permission has also been granted for retail space at the Honeycomb, offering the potential for a coffee and sandwich bar to serve the business park for the first time.

Mr Bourne, who operates three similar developments in Jersey’s capital, St Helier, said that Honeycomb Chester would be the first on the mainland as the brand is rolled out across the UK.

Mr Bourne said: “I chose Chester because it has a buoyant economy and plenty of ambitious firms seeking to grow and relocate to bigger and better premises. Chester Business Park boasts an attractive working environment and is very accessible.

“Honeycomb Chester offers the only small-scale accommodation of its kind on the business park. The honeycomb name really reflects the purpose of these offices – to provide a flexible office space for small business to grow together as a community.

“We’ve extensively renovated what was a tired set of buildings to a very high standard, providing office space from 1,000 to 10,000 square feet.

“Honeycomb Chester will be the first of a number of similar business community projects that we will open across the UK.”

The renovated units have an EPC rating of B, full low-energy air conditioning, fitted kitchen, LED lighting shower and WC facilities and a generous parking allowance.

The business park also benefits from significant public transport links, including a bus service to Chester city centre every 12 minutes, and is a short distance from the A55 expressway.

Stephen Mosley said: “These fantastic new offices will be of great value to the Chester business community.

“Chester is home to many successful businesses and educational establishments, and having high-quality office space that is ideally suited to incubating new and smaller businesses will help keep newly-trained and qualified workers in the area.”

Fraser Crewe, Director at BA Commercial, said: “The park has a fantastic pedigree with HBOS, Bank of America, M&S Money and Tetra Pak also based here, and now ambitious smaller firms can join them at Honeycomb Chester.”

Will Sadler, Associate Director at Legat Owen, said: “Office space of this quality is hard to find in the city, and Honeycomb Chester provides a fantastic opportunity for businesses to develop alongside similar sized enterprises.