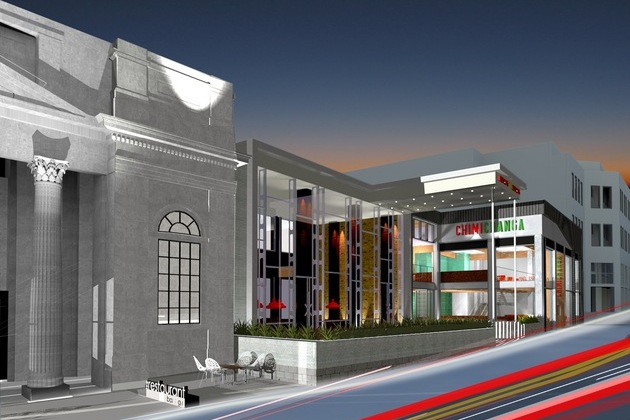 Bride Hall has revealed this week, that one of the most significant redevelopments within the city centre has begun.

The former Habitat and Multiyork stores on Pepper Street will be remodeled into a contemporary glass-fronted dining area, housing four national restaurant brands.

Latin-American restaurant Las Iguanas is the latest chain to sign up and will occupy the largest of four restaurants set to open in 2015, along with Chimichanga, Coast to Coast and Restaurant Bar and Grill.

North-West based contractor, Pochin, has begun transforming the empty retail units and the former Grade II listed Methodist chapel into a dining haven, which will include al fresco seating areas and a roof terrace.

The Carlyle Group and Bride Hall, owners of the buildings, are confident the new dining quarter will be a great boost to the city centre economy, initially supporting more than150 new construction jobs.

Roger continues: “There are some really exciting improvements beginning to take shape throughout the City and we’re thrilled to be able to update everyone on the latest Pepper Street dining district.”

“Combined with the commencement of work on the City’s business district, the new Grosvenor park and Paddock Row in Grosvenor Shopping Centre, this project will play an important role in linking all areas of the city to boost retail, business and dining trade.”

“Our vision is for Pepper Street to host and drive even more choice for City diners; offering a real vibrancy and variety for visitors to Chester. Piccolino’s, Black House Grill, The Church and Zizzi already situated across the road and then St. John Street restaurants and The Groves down the hill; we believe our stylish new development, will inject more footfall, personality and life into the area.”

With one of the key city centre bus stops being situated in Pepper Street, it is expected that footfall will increase with the introduction of the new retailers and restaurants, benefiting not just the existing stores in the shopping centre, but also those throughout the city centre.

Dad to stay locked in doors - even when lockdown lifts

Property Business News - A dad with a rare cancer who must isolate from his children is keeping his spirits up by running up to 4 miles a day from the safety of his home. Will Green, 29, is receiving chemotherapy for Hodgkins Lymphoma and cannot even open a window as exposure to fungal bacteria in the air could prove fatal.

Property Business News - Leading property consultancy youngsRPS has appointed rural valuation and professional services expert Tom Whitehead to spearhead its expansion across the North of England. Tom joins the business as an associate and has vast experience in a wide range of land and property consultancy services.

Property Business News - As we head into 2021, out with the old, in with the new has never been more relevant. Many of us are looking for new and fresh ideas, and as we re all at home a lot more, our surroundings and how we have designed our spaces is more important than ever.

Property Business News - Neville spoke of his formative years at Manchester United during an interview with celebrity event planner, Liz Taylor. His conversation kicks off the third season of her hugely successful Events That Made Me podcast, which puts the lives of celebrities under the spotlight and examines events that have shaped their lives.

Property Business News - Miller Homes, the award-winning housebuilder, has revealed a spike in house hunters looking online for a new home in 2021. Figures show that during the week after Christmas traffic to the website increased by 35 compared to the previous weeks 4 week average.