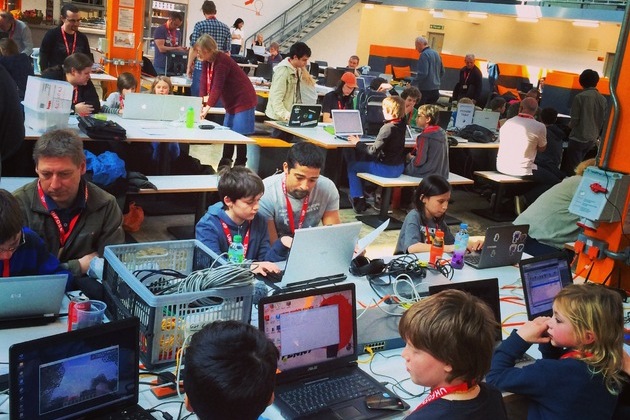 CoderDojo, a volunteer led initiative, that’s part of a global movement to get kids learning to code, has really taken off at The Sharp Project in Newton Heath, east Manchester.  There are more than 370 dojos in 41 countries worldwide including 146 in the UK alone.  Manchester’s dojo has been running since December 2012 and due to its success moved into The Sharp Project nine months ago.  Now, every second Sunday of the month, around 80 children of all ages, from primary school to teenagers, come together in what is believed to be the largest coding club in the world.

Run by 30 volunteers, the free dojo sessions include a variety of activities for a range of ages and abilities. Software used includes Minecraft, Scratch and Python and the children use laptops, tablets and Raspberry Pi computers donated by Google.  At dojos, young people between 5 and 17 years learn how to code, develop websites, apps, programs and games. In addition to learning to code, members meet like-minded people, show off what they’ve been working on and share ideas.  The average age of participants in Manchester is 10.4 years and there is a 60:40 split between boys and girls.

Commenting on CoderDojo Manchester, Founder, Steven Flower, said: “It’s incredible how quickly the Manchester dojo has grown and how popular it has become. Tickets go within two hours of sending out the newsletter. We have a waiting list and could easily have 500 attendees at each session.  The Campus at The Sharp Project is ideal as we create an environment more akin to a youth club than a school.  It’s a perfect space for parents to learn with their kids and teenagers to hang out.  I can’t believe we have bigger sessions than places like Sydney and Toyko.  What’s great is that some of the volunteers are setting up dojos in other places such as Bolton, Burnage and Wilmslow. We want CoderDojo to grow and reach as many children as possible so the more that are established, the better.”

Co-founder of the CoderDojo movement, James Whelton from Cork, Ireland said: “CoderDojo makes development and learning to code a fun, sociable and kick ass experience. CoderDojo also puts a strong emphasis on using open source and free software, and has a strong network of members and volunteers globally. There is one rule: ‘Be Cool’."

Eugene McDonough from the Hello World Foundation (HWF) and CoderDojo’s Chief Operating Officer added: "It’s incredible how the Manchester CoderDojo has grown so rapidly. I visited it recently and I was extremely impressed with the way it is run. They have got our ethos exactly right.”

Tom Clarke, Marketing Manager for SharpFutures and The Sharp Project said: “It’s been amazing to see the enthusiasm around Manchester CoderDojo, from both the young people attending and those delivering the workshops. There’s clearly a huge demand for such large scale coding events in  Manchester and we hope that by providing an exciting venue to host CoderDojo we are inspiring a new generation of skilled coders and developers  that will only help the wider creative digital sector develop in the North West”

Manchester CoderDojo is always in need of equipment such as laptops and monitors to help deliver the workshops on the day. Having a provision of ready to use equipment also means that young people who do not have access to a laptop can come and use one at the events.  Anyone able to assist Manchester CoderDojo by donating equipment should email donate@mcrcoderdojo.org.uk .

To sign up for the weekly CoderDojo Manchester newsletter which has information about sessions and how to book tickets visit mcrcoderdojo.org.uk/newsletters/ .
For more information on the global CoderDojo movement visit www.coderdojo.com.

The next Manchester CoderDojo is on Sunday 11 May and the June date is Sunday 8 June.