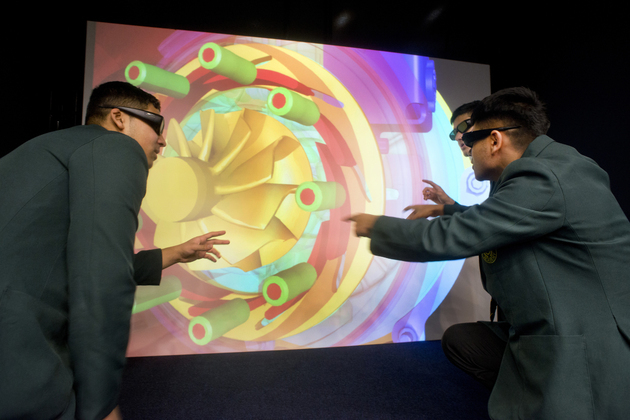 In response to the exponential global growth in the Augmented and Virtual Reality sector over the last 12 months, EON Reality, one of the world’s leading Virtual and Augmented Reality companies, has launched its first apprentice scheme in Manchester.

Based at their European headquarters at Central Park in east Manchester, there are 40 places available for young people aged 18 years upwards on the 12 month programme starting in January 2016.

EON Reality will support the apprentices during their training by offering up to £25 per week towards travel expenses.  Individuals will be trained in a range of skills including 3D/VR design, development, programming and application creation. This training will lead to an apprenticeship and a job in the creative and digital sector with EON Reality. The course is aimed at people who have some knowledge of digital content or 3D web media and an aptitude to learn about creative digital content, whether that be coding, real-time 3D engine, modelling or animation.

Training is done by 3D experts from all over the world using state-of-the-art technology, and unlike a typical course, apprentices will get the opportunity to develop applications and work on projects that are being used by today’s businesses and educators.

Ken Swain, EON Reality’s Managing Director in the UK said: “We have launched this apprentice scheme in response to the growing demand for Augmented Reality and Virtual Reality particularly with the move to mobile platforms.  It is forecast that the industry could be worth $150 billion by 2020 and as a leading provider of applications in this sector, we need to train talented people here in Manchester and develop their skills to help satisfy the demand for this evolving technology.”
EON Reality’s VR Innovation Academy Director of Global Education and Training, Marcin Kasica said:  “Manchester was a natural choice for EON Reality’s first apprenticeship programme.  We have an excellent track record of finding talent in this city, who are smart, creative and have a passion for VR. Since arriving here in March 2013, our business has expanded rapidly and the team in Manchester has played a huge part in this.  We now need to nurture more talent which will enable us to retain and grow our position as a major player in the sector.”

To find out more about EON Reality’s Apprenticeship Scheme, which starts on January 11th 2016, contact Alexandra Painter on 0161 669 6294 or visit www.students.eonreality.com .  Apprenticeship Awareness Mornings will be held on Wednesday 18 November and Wednesday 9 December from 10am – 12.30pm