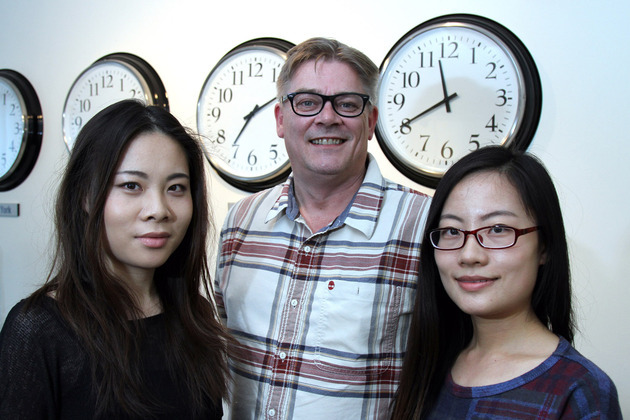 Xen Chen and Xin Zhao, both aged 24, are Masters graduates from  the University of Manchester  and  are now based at  a stylish office in the Wigan Investment Centre ,where they are working on major projects for billion-dollar companies in San Francisco and San Jose in California.

“It is great to have landed my first job with such a successful company”, said Xin, who graduated from The University of Manchester with an MSc in Management Information Systems and also has a First Class Honours in Business Information Technology from Birmingham City University. Xin now lives in Manchester with her husband Meng Tian a software analyst.

Her colleague Xen, who comes from Montreal Canada, and has extended family back in China,has a Master’s degree in Economics and has also studied  in Utrecht ,Holland before moving to Manchester where she now lives.

“I like being part of a small team but working on an international basis with room to progress and deal with new business challenges “added Xen.

“It is a small world really and once you step out of your comfort zone and are prepared to cross borders and move to new places it is very exciting. We are a young team here in Wigan and there is a great atmosphere in the office”.

Cloud, who are also set to move into bigger offices in the Wigan Investment Centre, are increasing their workforce from 8 to 16 staff and, whilst already working in many countries around the world, also have their eye on expanding business markets in Taiwan and China.

The data science company continues to make big waves in the tech market internationally and has grown from humble beginnings in an attic room at the home of owners Martyn Leman and Miranda Pocock, who set up the company in 2011, to being a world class player capable of attracting major global brands.

The company specialises in data migration and Customer Relationship Management (CRM) for global companies and almost 90 per cent of their clients are now overseas.

Some of their recent project wins include clients such as:

Johnson Controls of Milwaukee a $42 billion company working in the automotive, batteries and climate control sector.
Harmonica of San Jose, who build video streaming equipment.
The Travel Corporation of London, who have a raft of travel and tourism operators and works in 60 countries serving more than two million travellers.
IT company Appdynamics of America

Cloud is also hoping to announce several new lucrative accounts in the coming months. Both Martyn and Miranda are proud of their roots and relish the sustained support they receive from the Wigan Investment Centre team headed by Manager David Southam.

”We like to think that we are helping put Wigan on the world map in our own way, “said Martyn.“It is also the commercial kudos of being seen to be outside of London and yet working with some of the biggest corporations on the planet.

“We are building a really successful team here in Wigan and it has not gone unnoticed in the industry because we are helping companies to better understand the needs of their customers in a very meaningful and tangible way”.

The Wigan Company is also one of only five certified partners of Informatica Cloud internationally and is involved in creating and cleansing of Cloud based systems for everything from Human Resources to Healthcare and from the Banking sector to Recruitment and Travel.

For more details on Cloud Perspective or recruitment opportunities contact Martyn on 07791 423937 or email martyn@cloudperspective.co.uk