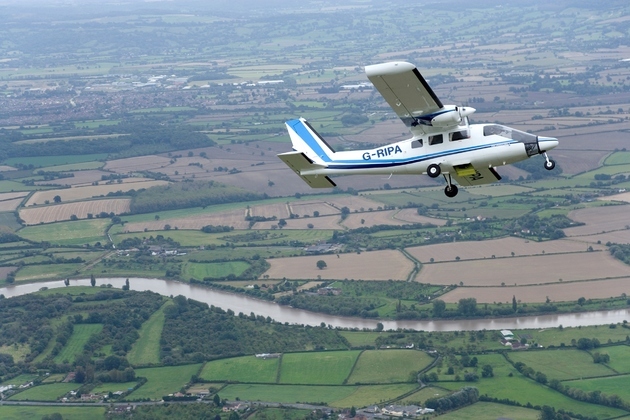 A pioneering project to pinpoint underground water leaks using sensors in the sky has won a top industry award.

The project’s success has earned United Utilities and APEM the trophy for the most innovative use of an existing technology at the Water Industry Achievement Awards, which were held in Birmingham.

He added: “We have a good record on leakage, having met the targets set by our regulators for the last seven years in a row, but it’s an issue we want to get even better at tackling, especially in areas such as west Cumbria where the water we use comes from some of the region’s most sensitive environments.

“In rural areas like this, some of our pipes can be many kilometres long, running through fields, giving us extra challenges to overcome when finding leaks which might be hard to spot from above ground.”

APEM, which is based in Stockport, Greater Manchester, specialises in aquatic, ecological and aerial surveys.

The firm harnessed its survey aircraft fitted with hi-tech thermal and near infra-red sensors to conduct the work for United Utilities.

Its sensors produced high-resolution images which detected signs of leaks from buried pipes.

One of the ways they identified leaks was through images showing vegetation growing more vigorously in some areas, indicating water presence.

APEM is understood to be the first company to develop an application of this kind to locate underground pipes and leaks.

Bosses now hope the technique will be adopted by other UK and overseas water companies looking to reduce leakage.

APEM director Stuart Clough said: “We are delighted that our innovative approach and the support we received from United Utilities has been recognised with this award.

“The application was at an early stage and United Utilities was far-sighted by recognising the potential advantages.

“Maps do not always show the precise location of buried pipes, which can lead to costly delays and wasted effort when tracing them for repair or inspection.

“Aerial surveys are cost-effective, can cover huge areas in a single flight, including remote, rough and boggy terrain, and there is no disruption to wildlife.”

Mr Clough added: “Pipe leaks are one of the biggest causes of concern for the public regarding the water industry, as well as a significant challenge in terms of sustainability.

“By helping to identify pipe leaks, our surveys help to reduce water loss and make our water supply more sustainable.”