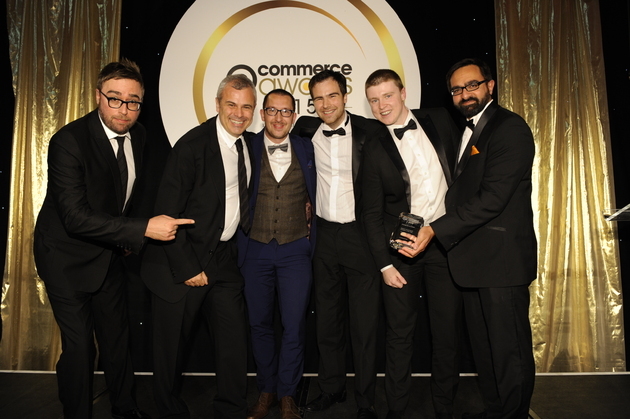 Clothing supplier Clothes2order is celebrating after winning two accolades within a week.
Clothes2order, which supplies customised clothing for uniforms, promotions and events, has been named the UK’s medium-sized ecommerce company of the year.
The honour came in the eCommerce Awards for Excellence 2015 at a ceremony in London attended by more than 500 industry professionals.
Days earlier, the firm scooped a regional accolade in the 2015 Chamber Awards, which are open to Chambers of Commerce members.
For the second consecutive year, the Trafford Park firm received the award for the best use of technology to improve business performance.
Clothes2order will fly the flag for the north west in the national final next month.
Meanwhile the firm is hoping for further glory as it is in the running for two honours – digital business of the year and the customer focus prize – at next month’s National Business Awards.
Clothes2order prints and embroiders logos and slogans on to clothing for more than 20,000 businesses, clubs, charities and societies as well as individuals.
Customers range from start-ups to household names such as Google, Coca-Cola, Mercedes-Benz and Kellogg’s.
The awards follow a milestone year for Clothes2order, with record turnover and investment, including a doubling of capacity at its headquarters.
Its focus on technology has seen it invest further in state-of-the-art printing and embroidery equipment, improved stock control and a mobile ordering facility for customers, while it has driven overseas growth with the creation of dedicated websites in Ireland and Australia.
It has also invested £250,000 in a venture which enables clubs, online communities, charities, trade associations and designers to sell their own branded clothing, caps and bags via the www.clothes2order.com website. More than 1,500 online merchandise stores have been created so far.
Managing director Michael Conway said: “Our investment in technology has resulted in major improvements to the service we provide to our customers and to our business performance and we are delighted that the progress we have made over the past 12 months has been recognised with two awards in quick succession.”
He is pictured, second left, with colleagues Jon Hartley, Simon Turner and Jamie Travis, with awards ceremony host Danny Wallace (far left) and Sacha Wilson (far right), of award sponsor Avalara.