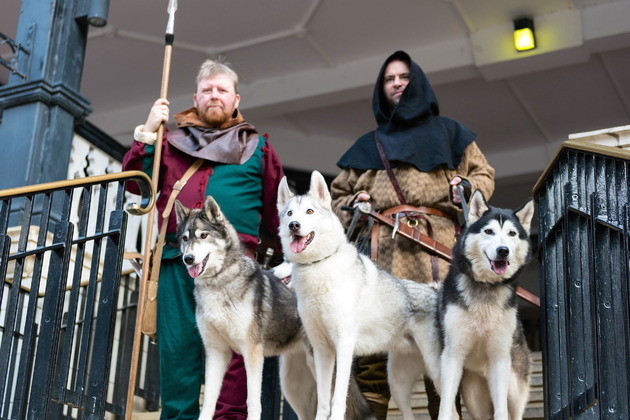 The launch of a medieval puzzle-solving challenge has been hailed a howling success after hundreds of families attempted to solve cryptic riddles scattered across Chester city centre.

Deva Codex Wolf Quest launched on Saturday (10 October), inviting the public to try and unlock a 2,000-year-old mystery by unravelling a series of clues in locations such as Grosvenor Museum and retailers including Jack Wills, Specsavers and Lakeland Leather.

Characters in historical costumes and a pack of Siberian husky dogs animated the high street throughout the launch weekend as people of all ages took on the Wolf Quest, which is part of Chester Unlocked – the history and heritage project created by CH1ChesterBID and Big Heritage.

“Deva Codex Wolf Quest has really caught the public imagination and we’ve given out hundreds of bags to people wanting to take part over the launch weekend”, said Julie Charlton, Marketing Manager at CH1ChesterBID Company.

“All the Deva Codex challenges have been inspired by real-life events and people from Chester’s past, so we’re using that history to bring our city centre to life and encourage people to explore some of the city’s hidden heritage.

“The Wolf Quest is open until Saturday 31 October and it’s completely free, so we hope everyone will find the time to take on the challenge, have some fun with friends and family and learn a little bit about our beautiful city at the same time.”

Deva Codex Wolf Quest follows on from the popular Boar Quest and is the second instalment of a trilogy of free citywide mystery quests from Chester Unlocked.

Historical characters will be in the city centre every weekend throughout the rest of October handing out free Deva Codex Wolf Quest bags for people to take on the challenge. Clues must be submitted online at www.chesterunlocked.com/devacodex/ where people can find out if they have unlocked the mystery, with prizes of up to £300 to spend in the city on offer for those that successfully solve the riddles.

People can take part any time between 9am and 5pm (Mondays to Saturdays) and 11am and 4pm (Sundays).