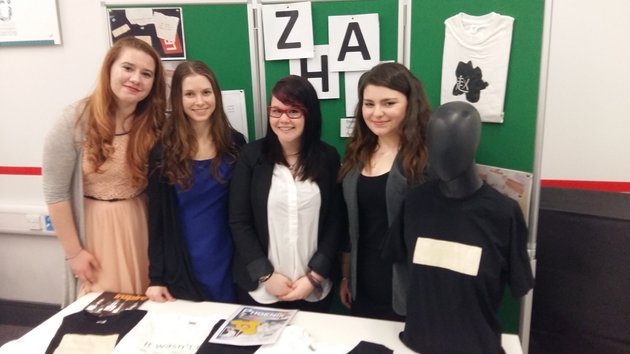 The team, consisting of five Level 2 Business students, took the top spot after setting up trading company ‘Zhao’ which sold bespoke t-shirts to the public.

The students managed and delivered the whole process from developing different design concepts to researching materials and agreeing the selling price.

Team member Stevie-Lea Court, 17, from Ellesmere Port, who took the role as Managing Director said: “The competition really made us all work as a team and enhanced everyone’s strengths. It was a great sense of achievement when we won the award as we were alongside a lot of other entries.

“We conducted a lot of in-depth market research for the project and found a gap in the market for custom made t-shirts which the consumer can fully design themselves.

“At the end of the competition we had a stall which displayed our visual graphics and we had to present our idea to the panel of judges.

“The competition gave me a chance to push and challenge myself and an insight into the real world of business, which was really exciting.”

Paul Mushrow, Associate Director - Management and Professional at West Cheshire College, said: “The Young Enterprise team worked really hard and fully deserved their win. They took a lot of time and effort researching a gap in the market and went on to create a fantastic product.  Their entrepreneurism is what caught the judge’s eye and contributed to their win.”
Team members were Stevie-Lea, Anastaija Karnova, Thomas Moscrop, Dominika Surcharczuk and Yasmin Yesidal.