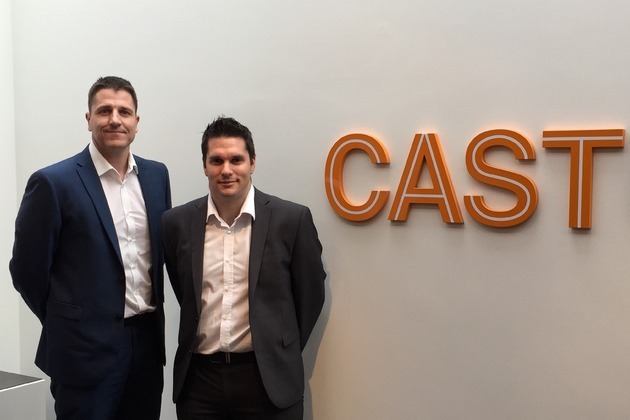 Gary Robinson has been promoted to the position of sales director and Dan Rowe will take on the role of account manager for the logistics team in the South.

Cast UK, which this year celebrates a decade in operation sourcing talent in procurement, buying, supply chain and logistics, is bolstering its top tier as it continues on a solid growth curve.

Gary, who joined the team in 2008 from DHL Exel, has headed up Cast UK’s logistics division since 2010 and will draw on his experience to manage and develop client relationships across the organisation’s specialist sector key accounts in his new director role.

Dan will assume the role of overseeing the company’s logistic team’s expanding portfolio in the South, which includes Brakes, Debenhams, Arcadia, Kuehne + Nagel, DHL and Wincanton.

The promotion follows a return to Cast UK for Dan in 2014, after initially joining the company in 2010 as a consultant.

Commenting on the promotions, managing director of Cast UK, Wayne Brophy, said: “Gary and Dan are both highly valued members of the team who have demonstrated strong leadership skills and made significant contributions to our bottom line.

“As ambassadors for our brand, their industry expertise has translated into a strong track record and they will both be instrumental in our next phase of growth.”

Gary lives in Runcorn and is a dedicated Everton FC fan and a follower of Warrington Wolves in rugby league. A keen sportsman, he is a regular attendee at the well known Tough Mudder and Hellrunner events. Dan hails from North Wales and plays cricket for Bacup CC. An all-rounder when it comes to sport, he is also a Warrington Wolves fan and follows Wrexham Football Club.