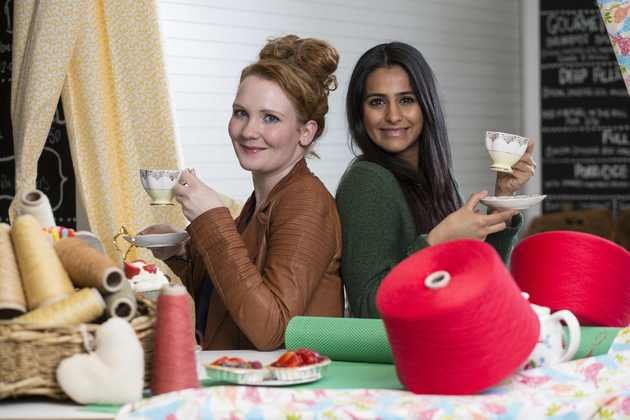 Six ‘Textiles Teashops’ are to spring up around Greater Manchester throughout the summer in a new drive led by the Alliance Project, based at New Economy, to attract textile workers from Greater Manchester back into the industry.

The campaign, launched by Coronation Street stars Jennie McAlpine and Sair Khan, will promote the sectors careers opportunities, with immediate vacancies for sewing machinists, weavers, cutters, textiles operatives and samples machinists as well as supervisory, management and professional positions.  The industry is offering retraining for those re-entering the sector and a range of fashion and textiles apprenticeships are available for those interested in joining the sector for the first time.

The Greater Manchester textiles industry currently employs 11,300 people, generating £650 million for the local economy.  This is set to rise and textiles employers estimate the creation of 400 new jobs each year over the next decade including 150 sewing machinist vacancies per year. This is a result of an increase in demand for British made products and the need to rejuvenate the regions textiles workforce in order to meet this demand.

Supported by funding from the European Social Fund, this campaign follows the launch of The Alliance Report: ‘Repatriation of UK Textiles Manufacture’, at the House of Commons earlier this year. The report is one of the biggest studies in twenty years on supply and demand in UK textile manufacturing.  Its findings show the industry is worth £9bn to the UK economy, contributing approximately 100,000 jobs in the UK with a predicted 20,000 new jobs to be created nationally by 2020.

James Eden, managing director of the luxury British label Private White VC, nestled in the heart of Manchester said   “We are expected to be able to respond quickly to the latest trends, and this is creating a second industrial revolution in Manchester.  Thanks to improved technology brought on by the digital age, the gap in manufacturing costs between the UK and off-shore production  has narrowed which means making textiles products in Britain, and indeed Manchester, is becoming  economically viable again. We also find many fashion houses, and their customers, want to support British industry and this is great news for the sector.”

Lorna Fitzsimons, Director of the Alliance Project said:  “We know that people who worked in the industry in the 80s and 90s have the skills we desperately need in order to compete with the global market. The Alliance Project is reaching out to local communities through the Textiles Teashop roadshow to identify people who have the relevant skills but are not currently working in the industry or using all of their skills. We also want to raise awareness of the sector’s revival, highlight current employment opportunities and progression routes and help people access jobs.  We look forward to meeting those interested in returning to the industry as well as school leavers and other young people who would consider a career in this sector.”

The ‘Textiles Tea Shop’ roadshow will take place in six locations across Greater Manchester throughout June and July. For more information on the Textiles Teashop roadshows including locations and dates visit www.textilesteashops.co.uk.