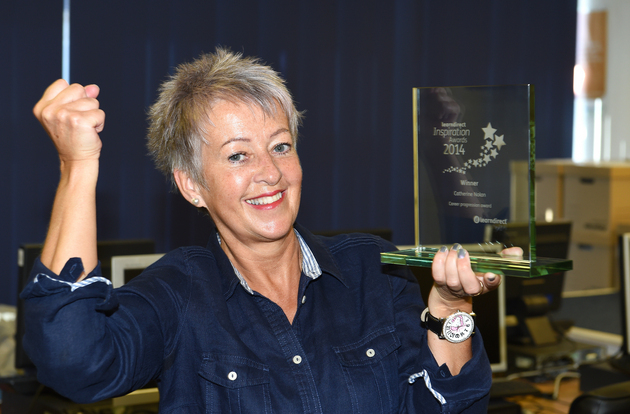 A Fylde coast mum has proved you’re never too old to learn after being honoured as one of the UK’s most inspirational learners in a national competition.

Catherine Nolan, 55, was crowned winner of the Career Progression Award at the Learndirect Inspiration Awards in London, which celebrate people who go the extra mile to develop their skills.

Judges were impressed by Catherine’s determination and commitment as she studied for a qualification in English with PHX Training in Blackpool, despite her self-confessed fear of the subject.

The healthcare assistant from Lytham even attended classes straight from her night shift at Blackpool Victoria Hospital.

Before being awarded the national title, Catherine beat learners from across the North of England to win the regional stages of the competition.

She was then invited to attend the national finals at the prestigious Kensington Roof Gardens, where she triumphed over finalists from the South, Midlands and Scotland competitions to be named the overall UK winner.

Duncan Wilding, centre manager at PHX Training Blackpool, nominated Catherine for the award after her hard work paid off and she achieved the equivalent of a GSCE English grade C.

Duncan said: “Catherine needed a qualification in English to move up in her career but was terrified of the subject and very low in confidence. Since then she’s undergone a complete transformation; she’s passed her qualification, is much more confident with aspects of her job which use English skills, and has been able to progress at work as a result.

“It’s fitting that Catherine has been named as one of the UK’s most inspirational learners as she really is proof that you can achieve something like this at any age and ability.”

Catherine added: "When I first found out I was nominated I didn't tell many people because I didn't think I'd win in a million years. I was over the moon when I won the regional award and I can't believe I've now been made the overall UK winner. It feels fantastic.

“It shocked me how much I managed to learn – I was nervous about even filling in a form before. Winning has given me a real confidence boost and everyone is really pleased for me, especially at work. I’m so proud of everything I’ve achieved and I’m even looking at enrolling on some other courses to help me in other areas.”

The Learndirect Inspiration Awards are held annually to honour remarkable learners across the UK. The Career Progression category celebrates learners who have improved their career prospects through learning.

For more information about PHX Training, contact Paul Farrell on 01253 291860 or email paulfarrell@phxtraining.co.uk