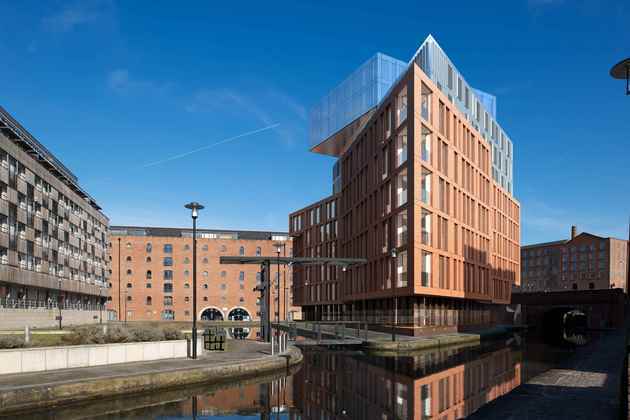 The proposed landmark building, designed by Manchester based Ian Simpson Architects, will be entirely residential and will incorporate a mix of one, two and three bedroomed apartments.

Overlooking the Rochdale Canal and marina, on the edge of Manchester’s Northern Quarter, the site is adjacent to Jackson’s Warehouse and forms the next phase of a previously approved masterplan for the regeneration of the Piccadilly Basin. Within easy walk of Piccadilly Station, this scheme will complement the City Council’s regeneration plans for the area in preparation for HS2, which includes a new station built alongside the existing station.

The development team has worked closely with English Heritage, who support the regeneration ambitions for the site, to develop a design which they consider responds well to the adjoining listed buildings.

Quality materials that respect and respond to the surroundings have been incorporated into the proposed design. The proposed building will feature three distinct sections. The lower level, built of brick, will echo the red, orange and brown tones of the Victorian warehouses.  The elevations on the middle level will be formed with aluminium or stainless steel panels, a nod to the ironwork features in and around the surrounding basin. The upper level will be completely glazed to contrast with the lower levels.   The glass sets the top section apart from the rest of the building and reflects the sky as well as becoming animated at night. The design incorporates a number of environmentally efficient and sustainable features including plenty of bike storage for residents.  There will be a private communal outside space facing the canal and marina, new lighting for residents and towpath users will be installed and green roofs created which as well as the ecological benefits will be visually attractive.

Richard Lewis, Property Director at Town Centre Securities said: “This was a key site in the original masterplan for Piccadilly Basin. Our ambition has always been to create a high quality, superior waterside development that completes the marina. We are committed to sustainable development and have a solid reputation for quality and innovation.  This scheme will sit well with other high specification, design led buildings we have brought to the Basin including BDP’s offices and the stunning conversion of Carver’s Warehouse on Dale Street.  In recent years TCS has worked hard to transform and regenerate the area, reopening the canal and tow paths, restoring historic mills, improving the public realm and building bespoke, design-led new buildings.

We have worked with Ian Simpson before on other significant projects including our original masterplan and the Urban Exchange retail development, and are delighted to have them on board again.  This is a fantastic opportunity to regenerate a previously developed brownfield site, add further character and distinctiveness to this attractive and increasingly popular part of the city centre and complete this part of the masterplan.”

GMI Construction Group is the development partner and Deloitte is the planning consultant for the scheme.