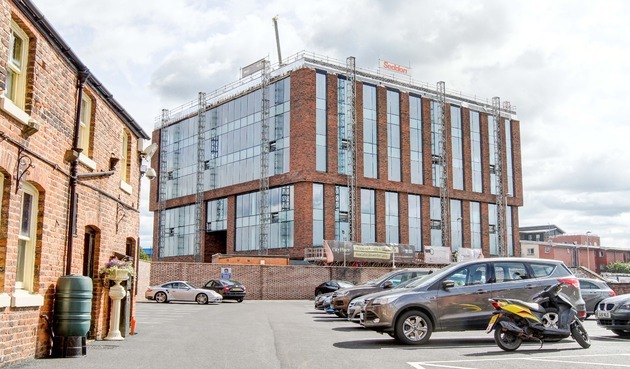 The footage shows the progression of One City Place, the first of seven buildings in Chester’s £100m Central Business Quarter which is set to feature 70,000 sq ft of BREEAM Excellent office space.

The footage highlights the dramatic improvements to the public realm around the scheme including the renovation of the Grade II listed rail sheds linked to Chester Railway Station which will be known as ‘The Carriage Shed’. The video flies through what will become a public passage from the station and up towards the new building.

Phil Mayall, development director at Muse, said: “This latest footage shows the progression City Place has made over the last few months. One City Place is soon to complete and the footage gives a real taste of the journey from Chester Railway Station through stunning new public realm and into the city’s first Central Business Quarter. One City Place will breathe new life into this area of Chester and represents a new, exciting business address for the city.”

Last month, Muse Developments announced plans to submit a reserved matters planning application for 100 canal side apartments at City Place. By 2028, it is planned that City Place will offer up to 440,000 square feet of state-of-the art office space housed within seven office blocks, creating around 3,500 jobs.

The scheme is part funded by a £4.8m development loan from the North West Evergreen Fund and a further £1.4m grant funding from the European Regional Development Fund.