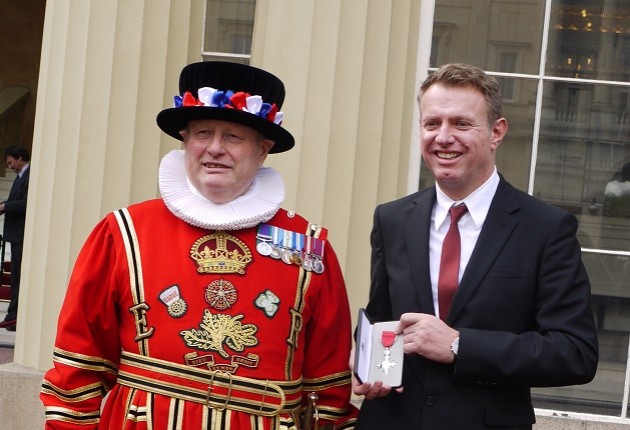 Jonathan Falkingham, creative director and founder of award winning regeneration company Urban Splash who have transformed buildings around Liverpool has this week collected an MBE from HRH Prince Charles.

Mr Falkingham, 51 and from Liverpool, was awarded the MBE following a recommendation from the Prime Minister. It means he joins his fellow Urban Splash co founder Tom Bloxham MBE in being granted the honour.

The MBE is the latest accolade to be granted to Jonathan, whose previous personal awards include the Institute of Directors North West Director of the Year and The Ernst & Young National Young Entrepreneur of the Year Award. He said: “I am absolutely thrilled with this announcement and to join the ranks of other business people who have been bestowed this honour. It was a fantastic experience to visit Buckingham Palace and be given the opportunity to meet Prince Charles again after first meeting him at our Collegiate development a few years back.”

Jonathan is one of the country’s most renowned architects. He founded the shedkm practice in Liverpool in the late1980s, before meeting Tom Bloxham MBE to discuss plans for the redevelopment of the Liverpool Palace. The pair embarked on a 20-year journey in transforming some of the country’s most dilapidated and challenging buildings and transforming them into places people can live, work and play. It is this commitment to architecture, design and regeneration that has earned him his MBE.

He continued: “The fundamental ethos of Urban Splash is to transform disused buildings and land and use great architecture to make them into contemporary communities. We’ve received some fantastic awards for our efforts over the past 20 years and this really is the pinnacle for me personally.”

Those accolades include more than 350 industry awards for the work that the company has carried out on schemes around the UK, as well as 51 awards from the Royal Institute of British Architecture (RIBA) – the most awarded to any developer in the country. Added to that, Urban Splash has also made the RIBA’s prestigious Stirling Prize long list for its efforts in redeveloping the Grade II Listed Park Hill scheme in Sheffield.

Concluded Jonathan: “Having third parties recognise what we do; from leading British Monarchs awarding the efforts of myself and Tom as directors, to the industry bodies who best know our work recognising the efforts we have gone to is constantly rewarding. It gives us even more passion and energy to keep doing it and spend another 20 years delivering the same standards of work and coming up with new ideas to help meet the UK’s housing needs.”

As well as his role as creative director at Urban Splash, Jonathan still sits on the board of shedkm and also holds a number of other positions; Trustee of both the RIBA and Royal Court Theatre Liverpool.