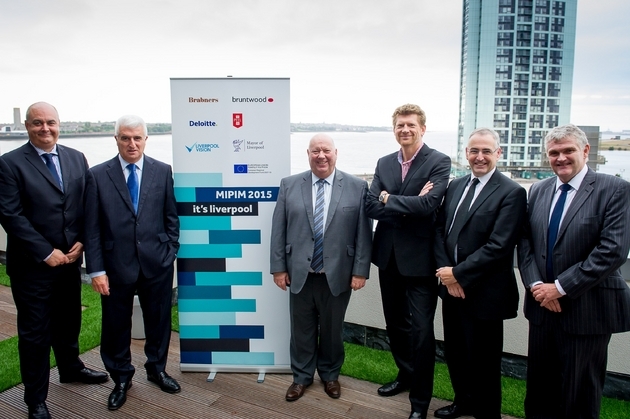 Following Liverpool’s announcement about its new look stand for MIPIM 2015, Liverpool at MIPIM has now launched its events calendar for the property conference, which takes place in Cannes between March 10th and 13th.

As part of a varied programme, Liverpool will be working closely with other cities on a series of events. The proceedings will kick off on Tuesday 10th March with ‘Unlocking the Investment Potential of Manchester and Liverpool’, which will feature an informal debate with Mayor Joe Anderson and Sir Howard Bernstein, Chief Executive, Manchester City Council.

The Mayor and Sir Howard Bernstein will also come together on the Wednesday evening for ‘Devolution: Investing in Leading Cities’, an event aimed at building on efforts to improve collaboration between the capital and other UK cities, this partnership event led by London and Manchester will focus on the potential opportunities offered by devolved powers.

Liverpool will also take the opportunity to link up with international contacts at MIPIM with a stand event where GVA will look at developments on the Waterfront in Hamburg and Liverpool. There will also be an announcement about partners for the 2015 Liverpool International Waterfront Forum on the Liverpool stand on Wednesday 11th March, followed by an informal meeting between the Mayor of Liverpool and the Mayor of Oslo.

Throughout the conference, Liverpool’s private sector partners will also take to the stand in a daily series of events. These include speeches and announcements from Deloitte, Morgan Sindall and City Residential.

Alan Bevan, managing director at City residential, said:  “Our event is entitled ‘Liverpool – The best value residential market in the UK?’ The aim is to highlight some of the major differentials in the pricing amongst other main northern city centres and, when coupled with some of the unique features we have as a city, highlight where we believe there is too large a gap between us and other cities like Manchester.”

GVA will be hosting an event on the Liverpool stand looking specifically at Wirral and Liverpool Waters and contrasting its ongoing delivery with Hamburg’s comparable harbour development through Hafen City.

David Sayer, Director at GVA, commented: “We’re delighted to see occupier appetite gaining strong momentum, a trend underlined by our recent instruction to market 12 Chapel Street. Our event will present some intriguing discussion around how Liverpool’s flagship scheme and its associated delivery mechanisms compare with those in Hamburg’s Hafen City.”

Colin Sinclair, director of property marketing at Bruntwood and a member of the steering group for Liverpool at MIPIM, said of the company’s stand event: “Workspace is changing. People want more than just an office. This year at MIPIM we\'re going to be talking about how Liverpool is leading the way in providing businesses with what they need to grow and succeed.\"

Colliers International will also host an event on the Liverpool stand entitled: ‘Regional Revolution: Neo Victorian Britain and the emergence of the Northern Powerhouse’.

Walter Boettcher, chief economist and head of research & forecasting at Colliers International, said: “The weight of international capital, alongside an aging population with pension providers seeking long-term stable returns, means that a once in a generation opportunity for economic transformation has presented itself. Roads, railways, ports, airports, utilities, telecoms, universities, schools, hospitals, elderly care facilities and so on offer assets that often have long lead times, large capital requirements and long paybacks. This large scale infrastructure development also produces the necessary framework for the creation of new geographies, providing new opportunities for real estate development across all asset classes.

“In our presentation, we’ll assess this once in a generation opportunity and open the floor to MIPIM delegates to discuss what is required to develop a firm foundation for the next 100 years; one that will benefit both the general economy and the emerging ‘Northern Powerhouse’.”

Liverpool Vision’s Max Steinberg said: “The events calendar for Liverpool has really taken shape over the last couple of months and welook forward to some meaningful debate from key property figures and leaders. Working in partnership with organisations, partners and our neighbouring cities on the events planner has made the programme really varied this year and we hope our guests and visitors to the stand get a lot of value from it.”
Liverpool at MIPIM is led and project managed by Marketing Liverpool, supported by its private sector steering group and partners.