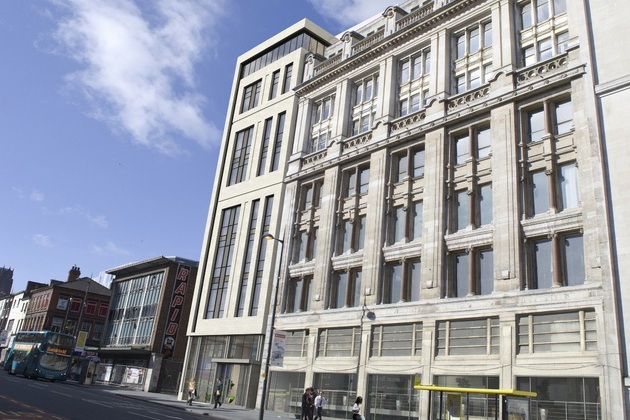 Plans have been approved to turn Liverpool's historic Watson Building into a striking, modern office facility, with work already underway on site.

The Grade II listed building will be extended and brought back into use as office space by developers West Nile Developments Ltd (WND) in a £16.5m refurbishment scheme. The scheme has received a £5.6m loan from Merseyside’s Chrysalis Fund which was created to support economic regeneration in Liverpool.

WND's development manager, Paul Wellstead said the news is a boost for Liverpool city centre, creating 73,000 sq ft of flexible new office space.
"We are thrilled to have been granted permission to bring this prominent and impressive listed building back into use, creating office space for over 700 new jobs,” he said.

The Watson Building dates from the early 1930s and is the only surviving element of the original Lewis's department store, the main building which was bombed in World War II and subsequently rebuilt in a simplified classical design. Contractors Bowmer & Kirkland were the successful bidders for the construction work which is due for completion by late 2015.

Mr Wellstead added: "Having fallen out of use many years ago, the Watson Building will be given a new future linked to the wider Central Village quarter, and offers the opportunity to act as a catalyst for wider regeneration of the Renshaw Street area.

"Work has already started on site and we expect early interest from occupiers keen to tap into the excellent staff recruitment opportunities, given the location of the building near to Liverpool Central railway station and the city centre's many retail and leisure facilities."

Jim Gill, chair of the Chrysalis Fund, said: “We are very pleased to have been in a position to provide a £5.6m loan towards the redevelopment of the Watson Building. It will provide high quality office accommodation in the heart of the city centre and much needed regeneration for the Lime Street area which acts as an important gateway to the city.”

The Chrysalis Fund initiative is backed by the European Investment Bank, the Homes and Communities Agency and European Regional Development Fund under the JESSICA (Joint European Support for Sustainable Investment in City Areas) programme. The fund is managed by the Igloo Consortium, which is made up of Igloo Regeneration Limited, GVA and RBC Capital Markets and operates in partnership with the Liverpool City Region LEP and the local authorities.