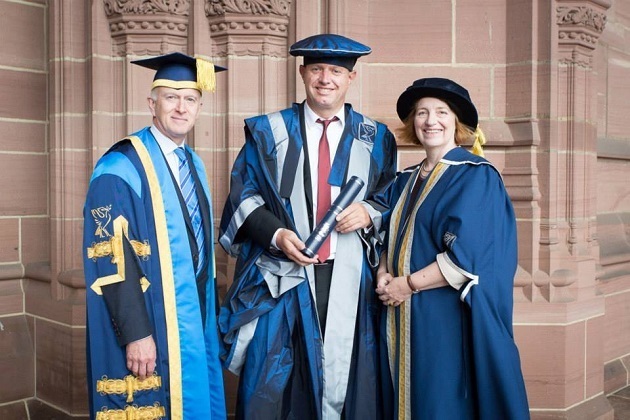 Jonathan Falkingham MBE, co-founder of Urban Splash, has received an Honorary Fellowship from Liverpool John Moores University in recognition of his outstanding contribution to entrepreneurship and regeneration in Merseyside.

Jonathan is Creative Director and Co-Founder of Urban Splash, which has been responsible for transforming some of Liverpool’s key areas; most notably Ropewalks, and in the wider region Urban Splash has also redeveloped the former Bryant and May factory in Speke. Now operating nationally, Urban Splash is behind many of the UK’s most challenging regeneration projects.

Jonathan is also a former lecturer at both Liverpool John Moores University and the University of Liverpool. A longstanding Trustee of the Royal Institute of British Architects, he was awarded an MBE for services to architecture and regeneration in 2013.

Speaking of his Fellowship – awarded at the university yesterday, Jonathan said:

"I am very proud and honoured to receive this accolade which, to me, demonstrates LJMU's undoubted recognition of the importance of urban regeneration.

"I came to Liverpool to study architecture in 1981; a year of infamous riots and a real low point in the city's history. I, however fell in love with the place and it’s now been my home for over three decade in which time, I would like to think that I have played a small part in the astonishing renaissance of this great city.”