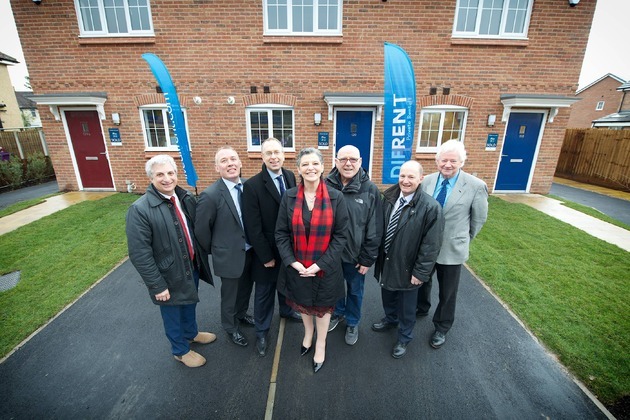 The event was attended by Cabinet Member for Housing, Councillor Ann O’Byrne, Sigma Capital, housebuilder Countryside, Councillors from Liverpool City Council and the team at Direct Lettings, which will let the new PRS homes.

The event marked the launch of the PRS joint venture’s initial phase of 927 new rental homes being developed across the North West, with a total development cost of approximately £100million, creating one of the first large scale PRS platforms in the UK.

The new PRS scheme provides a secure and affordable way to rent a home.  The ‘Difrent’ brand, which was also officially launched at the event, promises high quality interiors, appliances and design, with the benefit of an on-site maintenance operator, which will ensure that the properties remain safe and well maintained for years to come.

Councillor Ann O’Byrne, officially launched the PRS element of the already thriving Norris Green development (NGV Liverpool), saying: “A huge transformation has taken place at Norris Green over the last three years and the new PRS offering means that people now have the option to rent as well as buy at this fantastic development. Not only does this represent a great addition to the scheme but it is also great news for the city in terms of inward investment.”

Graeme Hogg, Chief Operating Officer at Sigma Capital, said: “Today marks a huge milestone in the Norris Green development as another aspect of the community begins to take shape and grow. We believe that Difrent will revolutionise the rental sector with a totally different approach. We want those letting Difrent properties to find it just as aspirational as the idea of owning a new home – safe, secure and with a great sense of community.”

Paul Staley Director at Direct Lettings, said: “We have already had a great deal of interest in the PRS homes at Norris Green and we have a number of residents ready to move in. Difrent is a completely new offering in the marketplace and one that is clearly exciting residents in the region.”

Ian Kelley, Managing Director, Countryside (northern), commented: “Countryside has built an extensive range of high quality homes in Norris Green since the launch of our NGV Liverpool development with Sigma and Liverpool City Council in 2011. The new homes for the private rental offering through Difrent at NGV will provide even more breadth of opportunity to those looking to move to this renewed and vibrant neighbourhood.”