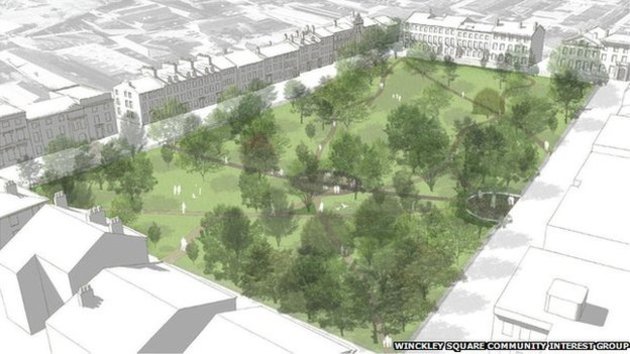 Croft Goode Architects are set to continue their contribution to the future of a historic Preston city centre park thanks to the involvement of director Mick Goode.

A £1m plan for Preston’s Winckley Square Gardens was revealed this week following proposals put together by the Winckley Square Community Interest Company of which Mick Goode is a director and co-founder.

The plan outlines many proposed repairs and improvements including better lighting at night for security purposes, the widening of footpaths, better land drainage to prevent flooding in lower parts of the park and strengthening the turf in certain areas to accommodate heritage and cultural events. Along with this, there are proposals for new plaques detailing the history of the gardens and repairs made to the statue of former Prime Minister Robert Peel which was first unveiled in the park in 1852.

Mick Goode was delighted with the progress and plans so far, he said: “I think we have an excellent interpretation of what the community wants and needs from Winckley Square. It tackles all the current issues surrounding usability and drainage while telling its wonderful heritage story.”

Winckley Square has a strong heritage having been modelled on Georgian residential squares in London and owned by some of the wealthiest people in Preston who resided on the square. The gardens remained private from their development in 1812 up until after the Second World War before formally becoming a public park in 1951.

Just over 60 years later, the plans for improvement are now to be submitted to both the Heritage Lottery Fund and the Big Lottery Fund for approval as well as Preston City Council for planning permission. If granted, work on the park could start as early as next year.

Winckley Square Community Interest Company was set up by businesses located on the square who came together through their focus of redeveloping the area and have previously received lottery funding to help with projects in the park.