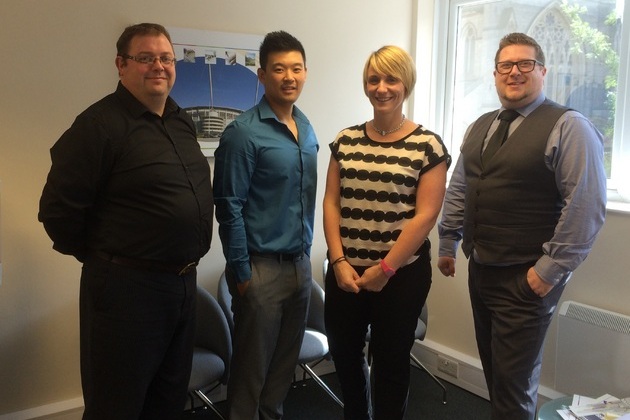 DSG Quantity Surveyors has announced the expansion of its North West office with the employment of a further four employees.

The practice was established in 2007 from managing director Steven Gosling’s kitchen table, and has enjoyed phenomenal growth in the height of the recession.  It opened its first office in Newbury in March 2007 and in Coventry in January 2011.  Just last April, DSG opened its North West office in Bolton and recruited ex Gleeds associate director, Bernadette Lord to realise its expansion plans into the North West.

Steven Gosling explains:  “The North West market was a region that we’d wanted to unlock after having great success in the Midlands and the South; it was the next obvious choice.

“We were delighted to welcome Bernadette to the business; she came with a wealth of expertise and knowledge of the region and really bought into the DSG ethos.”

In just over 12 months Bernadette has built a team of seven strong including three senior quantity surveyors, two junior surveyors and a marketing manager.  With clients including all of the main national contractors such as Morgan Sindall, Kier and Carillion, and with a particular specialism in BIM — DSG are the leading BIM specialists in the country — the practice is going from strength to strength.

In just two months, four new employees have joined the Bolton team including: Greg Wood who has joined DSG from GSL Associates — with over 20 years’ experience in the industry Greg has joined DSG to expand its professional quantity surveying services.  Mark Wood joins from IQS, as managing surveyor Mark manages the team in addition to working on some key projects such as Chancery Lane in London.  Will Cheng joins from Ventorex as junior surveyor, working closely with the senior team on all of the major projects and finally, Claire Hextall — previously communications manager at Muse Developments joins DSG as marketing and PR consultant.

Says Bernadette:  “It’s been a particular busy 12 months, and we now have the right team in place to make DSG one of the leading quantity surveying practices in the region.  With the market improving and the skills there to realise our aspirations we’re looking forward to the future.”