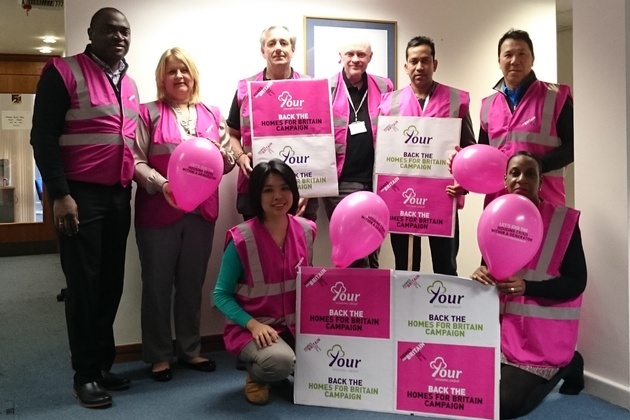 Ten members of staff from Warrington-based housing association, Your Housing Group, are taking part in a rally at Westminster in London on Tuesday 17 March for the nationwide ‘Homes for Britain’ campaign which aims to end the housing crisis within a generation.

Members of Your Housing Group, which owns and manages more than 33,000 properties across the North-West, Yorkshire and Midlands, also took part in the Manchester leg of the rally in Piccadilly Gardens, in Manchester city centre on Wednesday 11 March.

Homes for Britain is campaigning for the next government to come up with a long-term plan to tackle the housing crisis within a year of getting into office. It is being backed by thousands of people up and down the country who have joined forces with organisations from every corner of the housing world.

Across the UK, housing association staff, residents and members of the public are making their way to the Homes for Britain rally. Taking place in the heart of Westminster, thousands of people will come together for the biggest housing rally in a generation. They will unite to call on all political parties to take bold action and end the housing crisis within a generation.

Homes for Britain’s call comes at a time when housing demand vastly outstrip supply at both a national and local level. The North West is not building enough new homes to keep up with demand. In fact over the next 20 years 360,000 new households are expected to form in the region. At current building rates that would leave a shortfall of over 195,000 homes by 2031

While the average house price for the region (£158,926) is below the national average, prices in Trafford and South Lakeland are almost a quarter of a million pounds, approaching 10 times the average annual income in these areas.

Some areas are in desperate need of regeneration and jobs, and having the right types of homes in the right places can play a vital role in sparking new life into these communities.

Kate Teasdale, External Affairs Manager at the National Housing Federation said:
“We are delighted that that Your Housing Group is backing Homes for Britain. By taking the housing crisis to the heart of Westminster, Your Housing Group is highlighting the need to end the housing crisis within a generation. The next government needs to commit to a long-term plan – one that sets out how everyone can have access to the home they need at a price they can afford.

We want people from all walks of life to add their voice, so get involved - write to local politicians, tell your friends and family, and tweet us using #HomesForBritain.”

Andrew Edwards from Your Housing Group, who is leading the delegation from Warrington to Westminster said: “Only 120,000 new homes are being built each year in this country. We need to build more than double this number to keep up with demand as many people are struggling to find homes.  We are experiencing the worst housing crisis in a generation and we need the next government to come up with a long term plan to resolve it.”