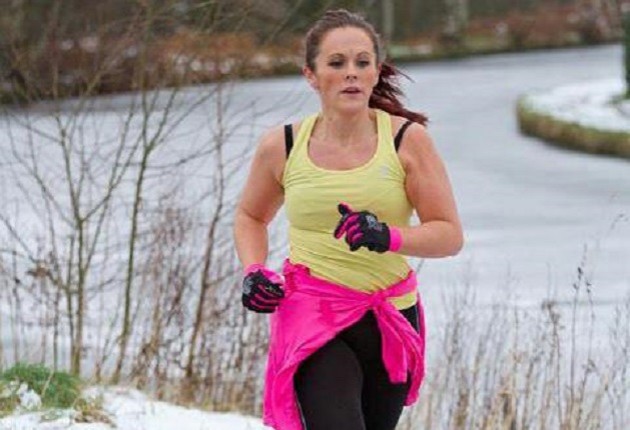 Claire Hampson, 37, lost nearly five stone and dropped from a size 16 to a size 8 after the suffering embarrassment at the school gates – six months after she had given birth.

The mum-of-four got fighting fit after joining Warrington Bootcamp at Evans House in Norman Street.

She said: “I’ve turned from someone very lazy, who wouldn’t even walk to the corner shop, to a little machine.
“I’ve been training to do a half marathon and take part in the Tough Mudder army obstacle challenge. The changes in me are unbelievable.
“I just feel absolutely fantastic, better than I did as even a teenager.  It’s the first time I’ve been 100 per cent happy with myself.”

Claire, who also runs and swims outside of bootcamp, will take part in the Tough Mudder challenge in Malpas for Help for Heroes.

She took part in the Warrington Bootcamps advanced course and soon found she was running rings round the average boot-camper.

She said: “I was on a strict diet – sometimes fasting for a couple of hours, then loading up on protein, and only eating carbs after certain workouts.
“I would have a cold bath before going to bed, which helps the body hibernate before sleep. It was a shock but I did it and I lost 12 inches.
“When I did the normal bootcamp I was flying past people. I seemed to have so much more energy.”

Claire, who works full time as a financial controller, has since treated herself to a £3,700 boob job following the weight loss.

Claire, who had been a D cup before the weight loss, shrunk to an A cup with her rigorous training and healthy diet. She is now an E cup since the surgery.

She said: “The only downside of the exercise is I burned weight from places I didn’t want to. So, the boob job was a big present for everything I’ve achieved. I was nervous but it’s the best thing I’ve ever done.”

Claire continued to do cardio work outs in the run up to her surgery and ate less because the workout was not as hard. She would train up to six times a week – and sometimes twice in one day.

Claire, who gets up at 5 am most mornings to work out, has had to ease off exercise temporarily since the surgery.

Claire was a slim size 10 at the age of 21, but she piled on the weight with the birth of each child. She would feast on take-aways, fast food and drink alco-pops and it became a vicious circle as her self-confidence plummeted.

She said: “I wasn’t big when I was growing up and found the weight gain difficult to handle. People would notice and make comments, such as ‘but you have a pretty face’ or ‘well, you have had children’. But it was no excuse.
“Then one day when I was on maternity leave, waiting outside the school gates with my six month old girl to pick the other children up, when another parent asked me when I was due. This was the wake- up call I needed.”

Claire had suffered from a lack of confidence when she was heavier and would rarely leave the house.

Claire said: “It was horrendous. I wouldn’t go out and I didn’t have a social life. I would get invited to go out but would be upset over my size when putting clothes on, which was just heart-breaking, so I’d make up excuses not to go out.
“People just thought I couldn’t be bothered or was unsociable. I really wanted to go out but felt so self-conscious, it was awful.
“Then because I was upset, I’d eat more and it became a vicious circle. I was stuck in a rut.
“I wouldn’t go swimming with the children either. My husband was frustrated and on a family holiday, when I was the only one not to go into the pool, he said it was a shame I was missing out on doing stuff with the children.
“He said ‘if you’re not happy, do something about it’. I was upset with him but when I thought about it, I knew he was right.”

On the back of such comments, Claire signed up for a five week course with the bootcamp.  She found it tough going but more than a couple of months later had signed up for the 6am morning starts.

The bootcamp, which also focuses on fresh, healthy nutrition, later introduced her to ‘project X’ and she trained up to six times a week.

Claire, whose children are aged three to 16, said: “The bootcamp was tough and I didn’t think I’d be able to carry on. After the first week I was stiff and sore and struggled to walk upstairs.
“During the second week I came home and collapsed on the floor in front of my husband and started crying. I didn’t think I could do anymore but didn’t want to waste the money. Also, my husband didn’t think I could do it and I wanted to prove him wrong!
“Now the healthy lifestyle has rubbed off on the children now too. My eldest son has started running and is getting into rugby and as a family we watch what we eat.”

Claire’s husband Chris, 37, is also delighted with the results and has joined a gym to keep fit too.