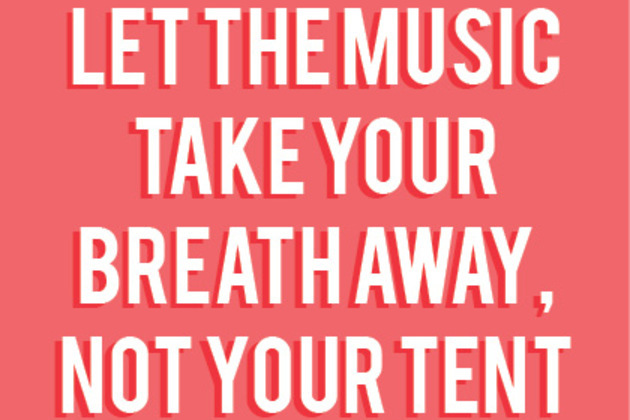 A worrying number of festival goers aren’t aware of the risks of carbon monoxide (CO) poisoning while camping at festivals, a safety campaign is warning.

#TunesnotFumes will raise the profile online about risks of poisoning through the use of BBQs, stoves and heaters at festival campsites.

A third of the survey respondents said they went to a festival in the past 12 months yet while two thirds (65%) knew there was a risk of a gas explosion while using a cooking stove, only a quarter (25%) knew about the risk of carbon monoxide poisoning.

The research highlights that clueless festival goers are putting themselves at risk of carbon monoxide - a dangerous colourless, odourless gas which killed 40 people last year in England and Wales and caused approximately 4,000 to be admitted to hospital.**

Specifically targeting young festival goers aged 18 - 24, #tunesnotfumes will educate about the symptoms of carbon monoxide poisoning, as well as the dangers of using a barbecue or cooking stove inside a tent or in its porch.  At gdngames.co.uk, @iFest15 on Twitter and iFEST15 on Facebook festival goers can play iFEST, the free online game, as well as search through tips and learn about the risks of carbon monoxide poisoning and how to stay safe.

Barry Sheerman MP, co-Chair of the All-Party Parliamentary Carbon Monoxide Group and spokesperson for #TunesnotFumes said: “We found it worrying to see that this isn’t about young people ignoring the dangers and choosing to take risks. Instead they simply aren’t aware of the dangers. An increasing number of young people fall ill because they don’t realise that bringing a BBQ inside their tent, or using a stove to warm them up when it’s cold cause result in fatal poisoning.”

He adds, “Festival goers are often warned about the dangers of alcohol and drug taking while at a summer festival. We want carbon monoxide to be ranked as highly as those for potential risks young people should be aware of. Our message is simple, let the music at a festival take your breath away, not carbon monoxide”.

#TunesnotFumes raises the profile of carbon monoxide poisoning and encourages festival goers to look out for symptoms like nausea, excessive tiredness and blurred vision. It’s also reminding festival goers to never bring a BBQ or cooking equipment into their tent, even onto the tent porch while they sleep.

Every week the campaign is giving away festival survival kits including ponchos, glow sticks and ear plugs as well as CO alarms to use in tents.