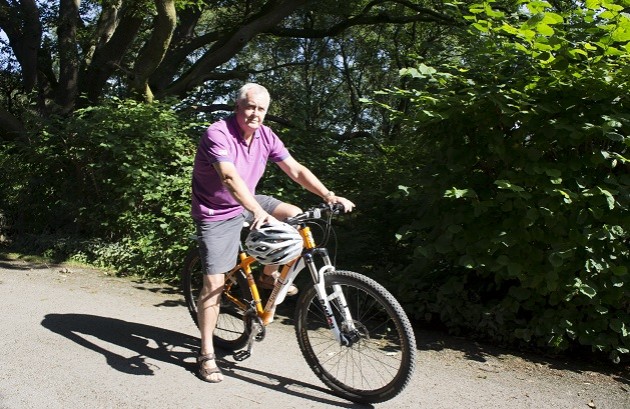 Merseyside businessman Steve Daly got on his bike to develop a leaner business after taking advantage of a health initiative being offered by Knowsley Chamber.

He has since developed a passion for cycling, along with business partner Carl Brooks who rides to and from work, and has managed to shed two stones in the process.

“We received £500 to buy two mountain bikes and it has literally transformed us and our business,” said Steve, who set up Kingfisher Design and Print eight years ago and now counts the University of Liverpool and QVC amongst his clients.

“Carl and I initially began by cycling around Knowsley Business Park, where we are based and built it up from there. Carl now cycles to and from work three times a week and I have developed a keen interest in cycling at weekends.

“I have managed to lose two stones and it has given us lots more energy to run our business, which we really need as we are busier than ever.

“Running your own business requires a lot of energy but businesspeople can lose that, particularly when they reach middle age. This initiative has been terrific for us and when we come into work we feel energised and are full of enthusiasm.”

Funded by Knowsley Public Health, Working Well is a Government initiative that aims to encourage businesses to take a greater role in prevention and health improvement, both with their staff and the wider community.

The idea is that by addressing staff wellbeing, as well as legal obligations around health and safety, companies should improve business productivity and efficiency due to reduced absences and lower staff turnover.

Working Well is based on targets around healthy eating, physical activity, alcohol reduction, smoking cessation, mental health and wellbeing and health and safety.

Lesley Martin-Wright, Chief Executive of Knowsley Chamber, said: “We are now in our second year of the Working Well initiative which is the result of an effective working partnership between ourselves and Knowsley Council.

“The take up has been terrific with 58 businesses taking advantage of the grant, with a further 138 businesses signing up to following the Working Well standards. The aim is to create a healthier, more resilient workforce and this has certainly proved the case at Kingfisher Design and Print.”