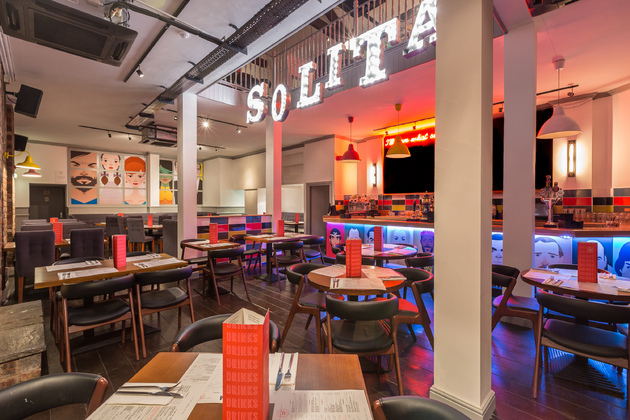 After much anticipation, SoLIta Didsbury has opened its doors to the public revealing its modernist interior inspired by DV8 Designs’ creative storyboards.

Lee said: “Our objective was come up with a design that would incorporate the signature urban attributes from the site’s highly-renowned sister venue, whilst forming an original twist.

“Therefore, we produced a diverse array of creative storyboards, which encouraged Franco and Simon to go ahead with the ultra-modern and playful designs. We were also responsible for getting on-board the fantastic artists, who added to the quirky interior.”

Established in 2013, SoLIta on Turner Street, Manchester, was set up to deliver a fresh thinking American-Italian eatery. As a result of its success and on-going popularity, the new Didsbury site aims to accommodate the more suburban crowd.

Franco said: “At last we’re here. We took our time, hoping to get it just right. We had to completely gut the kitchen and the interior has been transformed. As for the food – we’ve added to the menu, which we know is loved in Manchester but we wanted to add a lighter touch too.”