NoChintz Brews Up Ideas For Teacup And Proper Tea In Manchester 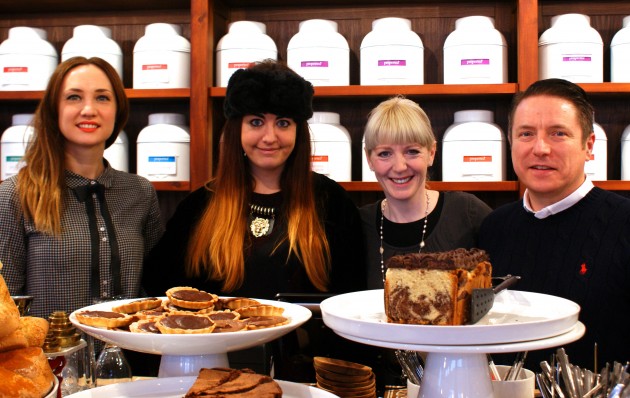 Interior and branding studio NoChintz has completed two new commercial projects in Manchester on behalf of the Sparklestreet group of companies; owners of Manchester’s Teacup Kitchen and Proper Tea at Manchester Cathedral.

The Northern Quarter based team has completed projects which required the resources of both its divisions; NoChintz ID – the studio’s branding and graphics offering completed the brand refresh of Teacup Kitchen. The team developed new window graphics which cleverly use silhouetted cutlery as well as creating new menus and other literature within the eatery.

NoChintz ID also teamed up with the NoChintz interiors team to complete the brand new Proper Tea at Manchester Cathedral. The tea rooms is owned by Sparklestreet and TV star Yvette Fielding who tasked the team with creating a space that was contemporary yet accommodated the prevalent surrounds of Manchester Cathedral and its visitors centre – in which the tea room is housed.

Yvette Fielding of Proper Tea said: “I have been dreaming about having my own tea rooms since I was a young girl and NoChintz have done a fantastic job in realising my vision and that of the entire Proper Tea team.”

Her business partner, the Manchester based entrepreneur Gary McClarnan added: “This is the perfect environment and exactly what we had envisaged; we are getting great customer feedback already.”

As well as creating the overarching Proper Tea brand, the graphics team also designed the bespoke loose-leaf tea labels, which were affixed to tea tins, and paper packs whilst the interiors team developed the light and airy interiors, collaborating with furniture maker and designer Peter Masters – who had previously worked on the original concept for Teacup Kitchen.

Their initial designs saw the creation of tables and chairs featuring distinct patterns made up from individually drawn configurations of antique teacup handles and doors, as well as bespoke cabinetry and an innovative tea service area which acts as a focal point as does the black and white flooring that distinguishes the café space. NoChintz also designed and apothecary style counter area on which a multitude of loose-leaf teas are displayed.

Speaking of the completed work NoChintz creative director Natalie Gray said: “These were great projects to work on and another fantastic addition to our portfolio of work in the leisure sector.”

The news comes after a successful year of leisure projects for NoChintz in 2013; in the autumn the company’s two divisions completed the 10,000 sq ft QDos gym in Heald Green, Cheshire.

NoChintz was established in 2007 and has since grown into a flourishing interiors and branding studio. It recently announced an increase in turnover to £1.55m for the past year.