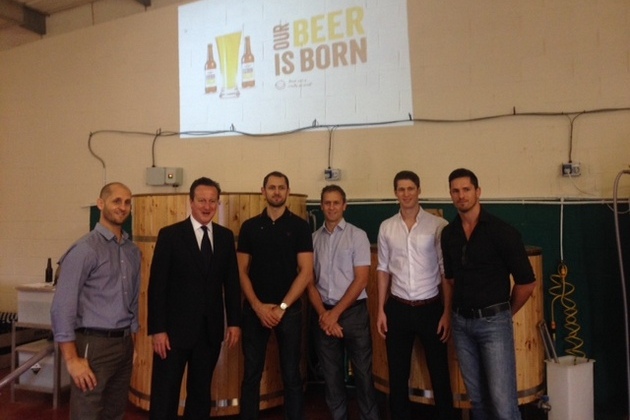 Prime Minister David Cameron paid a visit to Salford yesterday (30 July 2014) to meet the team behind the Seven Bro7hers brewery, one of over 1000 start up businesses in the North West that have been helped by the Government backed Start Up Loan scheme that is delivered in the North West by Business Finance Solutions (BFS) www.start-up-now.co.uk

BFS leads on alternative business finance on behalf of Greater Manchester and the wider North West and has distributed over £5m to people setting up their own businesses via the £150m Start Up Loans programme and provides pre application business support, low interest loans and mentoring to start up businesses.

David Cameron said: “I am delighted to visit Seven Bro7hers. These brothers had the idea of starting up a brewery, applied for a Start up Loan, and are now making their dream of running their own business a reality.

Backing business is a key part of our long-term economic plan and the strong spirit of business and enterprise in the North West means this part of the country is leading the way. It means more jobs for hard working people; more opportunities for people to break out on their own and be their own boss; and more prosperity and economic security for us all. Together, we will build a brighter future for our country”

During his visit the Prime Minister met five of the team behind the SEVEN BRO7HERS BREWERY in Salford, a new age craft beer microbrewery set up by seven brothers from a variety of business backgrounds. The family team of Keith, Kit, Guy, Luke, Daniel, Nathan and Greg McAvoy will be offering high-quality, innovative craft beers, all brewed using only natural ingredients and sold direct to customers via pubs, supermarkets and by mail order.

The brothers began to plan their business in 2013 and met with BFS who arranged Start Up Loan Funding of £45K, including £15k from NatWest who partner with BFS in the Start Up Now scheme, which enabled them to secure premises, equipment and raw materials. The business will be creating seven new jobs including two Master Brewers and five sales and technical positions when the brewery launches in August 2014.  The brothers will be selling seven beers initially including the company’s flagship beer, an India Pale Ale (IPA), along with a Porter Stout, and a watermelon wheat beer with a range of seasonal brews to be launched throughout the year. Once the Brewery’s retail market is firmly established the Seven Brothers long term goal includes opening their own brand of pubs and bars across the UK and Europe. The brewery is now on Twitter @sevenbro7hers.

Paul Breen, Director of Business Finance Solutions, said: “The visit from the Prime Minister and the latest Start Up Loan figures illustrate how our Start Up Now partnership with NatWest is filling a real gap in the market for entrepreneurs.

The 1000 plus businesses we have helped since 2012 may well not exist today if it had not been for Start Up Loans and that is due as much to the mentoring and business advice they receive from the BFS team as it is to the financial support that we have provided.  Many of these businesses are now thriving and having a wider impact on the economy, employing their own staff and utilising other businesses such as accountants and designers as their company grows.”

BFS Start Up Now will see £15 million allocated to new start-ups across the North West over the next two years, creating around 3000 new businesses and over 5000 new jobs in the region.