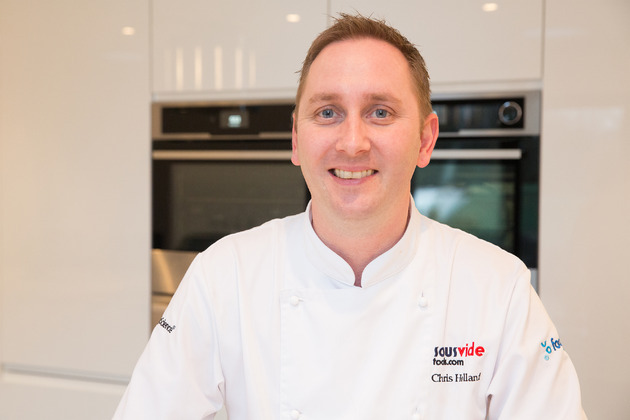 Lancaster based Sous Vide Tools has announced the appointment of Chris Holland as chef director.

Chris, who is 40 and lives in Wilmslow, joins Sous Vide Tools, Europe’s only supplier of both home and professional sous vide culinary equipment, from 3AA Rosette Alderley Edge Hotel.

As part of his role, Chris will work with Sous Vide Tools professional kitchen clients, advising on sous vide techniques while heading up its new Tool Shed, a state-of-the-art sous vide training kitchen planned to be launched later this year. He will also help develop the company’s online service providing technical advice and recipe ideas.

In 1996 Chris joined Alderley Edge Hotel as a junior sous chef before taking on the head chef in 2006, also achieving his ambition of taking the hotel from two to three Rosettes.

Other career highlights include gaining the title of North West Chef of the Year and being hand selected to appear as a contestant on the BBC’s hit series, the Great British Menu.

Chris’s love for using locally sourced ingredients and modern cooking techniques prompted him to further explore flavour-enhancing practices. In 2005 he introduced the sous vide cooking method into his menus at Alderley Edge Hotel which received a positive reaction from food critics.

His interest in sous vide, a French term meaning cooking under vacuum, triggered a partnership with Sous Vide Tools. It was here that he co-wrote the UK’s first sous vide cook book, Sous Vide: art of precision cooking. It has since sold 5,000 copies world-wide.

Now, armed with ten years’ experience using sous vide techniques and products, he will share his expertise delivering specialist training sessions to both professional chefs from local businesses and home cooks who have an interest in modern cooking techniques.

The expert training will take place in a new state-of-the-art kitchen titled the ‘Tool Shed’ based at the Claughton Business Park site in Lancaster.

Of his appointment Chris commented: “Sous vide cooking has helped shape my individual cooking style, leading to a number of career achievements. It’s such a beneficial way of cooking and I’m looking forward to passing on my technical know-how so others can reap its rewards.

Sous Vide Tools was recently shortlisted for the Lancashire Business Awards. Its clients include the Gordon Ramsay estate, Simon Rogan at Claridges and the number one restaurant in the UK, L’enclume. It also supplies the chains such as MacDonald Hotels and Ribble Valley Inns.

Alex Shannon, managing director at Sous Vide Tools, said: “We sell an extensive range of high-quality sous vide products along with providing expert advice, training and technical support. It’s time to take this to the next level by helping chefs and local businesses fully understand the technique in an interactive way.

“While sous vide cooking is a popular technique used in professional kitchens, there’s a growing phenomenon among home foodies and we are confident Chris’s appointment will help more customers gain access to professional cooking styles.”