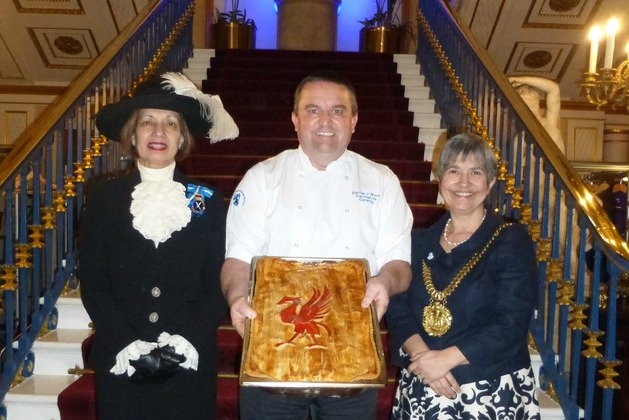 The giant creation is filled with the city’s most famous dish Scouse and was created by the Roby Mill firm’s Director and Master Chef of Great Britain Darren Wynn especially for the annual calendar week (March 2-8) .

Darren said: “We like to get creative in the kitchen whether it is for a wedding, corporate function or other large scale event and thought what better than to create a special pie just for Liverpool.

“The filling is a mixture of skirt of beef, potatoes, carrots and onions, together with a splash of local Liverpool beer.”

New research has revealed that 75% of people enjoy a pie at least once a month, with British Pie Week growing every year with pie-eaters everywhere seeking their ultimate pie perfection.

Darren added: “The great thing about pies is that they are great for sharing and everyone can have a slice of the action! They work with a majority of fillings but we’re certain this new variation will become a new favourite when it comes to this staple in British food.”

Carringtons have worked with numerous high profile clients during their 25 years in business including royals, sports related personalities and authorities. In 2008, they were be nominated as the caterer for the official opening dinner for the Liverpool Capital of Culture celebrations.

They now work with Liverpool Town Hall, St Georges Hall and the Floral Pavilion in New Brighton, to name a few.