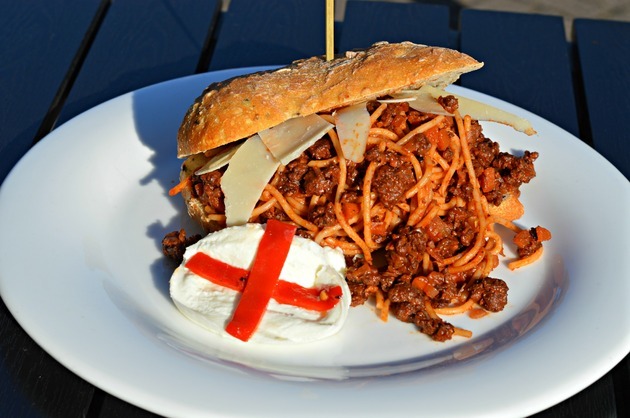 To kick off the world-cup celebrations, Delifonseca Dockside is set to serve a trio of comedy man-sized sandwiches.

The team at the multi-award winning eatery have devised a selection of match day munchies, which will be available during each England group stage game.

In hopes of impressing both footy and foodie fanatics, when England play against Italy on Saturday (June 14), the premiere sandwich will be available – this being a hearty spaghetti bolognaise sub with a twist.

Proprietor Candice Fonseca said: “As a nation, we can’t resist a bit of world cup madness. Therefore, we thought that it would be a great idea to offer our guests something quirky during the match day celebrations.

“All of our sandwiches have been crafted with authentic tastes from across the globe. We have revamped traditional dishes as flavoursome fillers, in order to add a contemporary touch.”

Following the debut deli offerings, guests will then see the arrival of two other local cuisine inspired sandwiches. During England’s match against Uruguay on June 19, a bespoke baguette will be presented, which will feature the authentic flavours of Chimmichurri sauce and spicy sausages. Likewise, for the Costa Rica game on June 24, visitors will have their taste buds tantalised with a black bean and sweetcorn fritter delight.

In addition to the specialist sandwiches, Delifonseca will also be serving an indulgent world cup dessert throughout the entire football tournament. Infused with the tastes of Brazil - a sweet caramel milky marvel, known as Dulce de Leche, will be available.

Candice added: “We hope that we will be onto a winner with our exclusive culinary creations. Our aim is to provide authentic taste sensations that combine both great food with a sprinkle of football cheer.”