Delifonseca is 'Highly Commended' at the 2014 VisitEngland Awards for Excellence 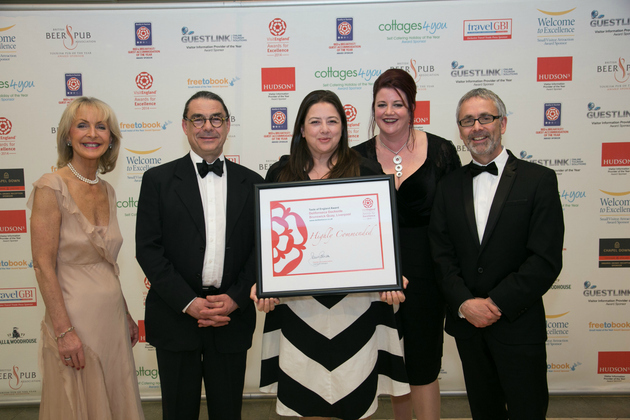 After wowing some of the UK’s most renowned food critics, Delifonseca Dockside has been awarded with a Highly Commended Award in Taste of England category, at the VisitEngland Awards for Excellence 2014.

Located on Brunswick Quay, the multi award-winning eatery and deli beat off stiff competition from around the UK, and is now recognised as one of the top five businesses throughout the country in their category.

The prestigious awards ceremony, which took place in Cheltenham Racecourse on May, 12, saw the arrival of the best tourist and attraction businesses from across the nation, many of which were from Liverpool.

Candice said: “We are delighted to have won such an admired accolade. The team and I are immensely proud to be considered as a top five eatery throughout the UK. We feel extremely passionate about what we do, and are therefore thrilled that our efforts have not gone unrecognised.

“The awards ceremony was such a memorable night, given that Liverpool did so well overall – big congratulations to all.”

In hopes of rewarding ethical eateries, the aim of the Taste of England category is to celebrate and raise awareness of national tourism businesses that produce or prepare fine food, which has been locally harvested, and also contributes to the long-term sustainability of the local community.

James Berresford, Chief Executive of VisitEngland said: “It is a great achievement to win a Highly Commended Award in a field of very high quality applications. The award places Delifonseca Dockside as a highly admirable restaurant. I warmly congratulate them on this triumph.”