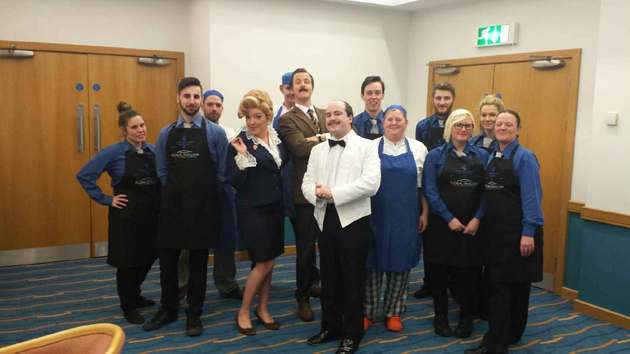 Carringtons Catering offered more than 900 guests a dining experience with a difference with the help of a world-renowned Australian theatre ensemble.

Interactive Theatre International Group descended on the Floral Pavilion for a total of four nights to perform a unique, loosely scripted re-enactment of the hit BBC series Fawlty Towers.

As guests arrived at the Wirral venue, they we’re greeted in true ‘Fawlty’ style by Sybil, Basil and Manuel, before becoming a part of the show as they tucked into their three course feast, which had been devised by director of Carringtons and Master Chef of Great Britain Darren Wynn.

Darren said: “It was completely different to anything that we have ever done before and the guests – both young and old – really loved it! It was a real mix of great food and drink, lots of laughter and an evening jammed packed with fun and games.”

Since its debut in 1997, Interactive Theatre International Group have travelled the world bringing a touch of Fawlty magic to thousands of fans and to critical acclaim. It is a globetrotting show has been selling out at Edinburgh Fringe annually since 2008.

Darren added: “For us as a business, it is fantastic that we are able to work on events such as these thanks to the venues that we work in association with and the adaptability of our chefs who continue to exceed expectations and deliver first class food that excites our clients.”

For more information about Carringtons Catering visit www.carringtons-catering.co.uk or call 01695 632 227.