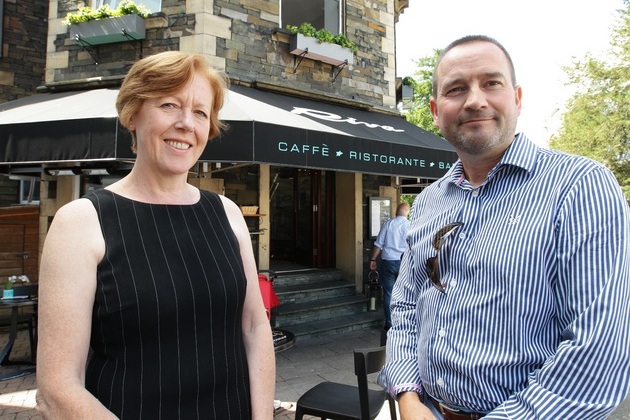 Two entrepreneurs behind a new Italian-themed restaurant in the Lake District are already planning to open up at two more locations following its successful launch.

The restaurant, set over four floors to provide four individual dining experiences, opened in June and has already proved so successful that Colin and Alex are now hoping to launch two further restaurants in Windermere and Ambleside, potentially opening up a new franchise concept.

Success is in the blood for the two entrepreneurs. Colin is a hotelier with two properties in the Lake District, while Alex’s father Enzo Mauro, also a restaurateur, starred in the late celebrity chef Keith Floyd’s BBC television series ‘Floyd on Food’.

Colin Monk, owner and managing director at Caffe Riva, said: “After searching for a property for two years we were fortunate enough to be approached by the previous owners before the property was put on the market.

“We have been overwhelmed by the response we’ve had from locals and tourists alike. We see this as a pilot for further Caffe Riva restaurants and are looking at other locations that could be just as successful.”

The property team at Harrison Drury Solicitors advised the pair on all legal aspects of the new business and negotiated a fifteen-year lease of the property.

“Even after years of experience, taking the plunge and investing in a new business concept and a long-term property lease can prove quite stressful,” added Colin. “Harrison Drury’s expertise was invaluable in providing us with legal security and peace of mind.”

Naomi Fell, director at Harrison Drury, said: “The restaurant sector was one of the hardest hit by the recession, but as the economy strengthens the sector is once again thriving for those with the right business model. Colin is a seasoned entrepreneur and with Alex’s skills I’m sure the business will be a huge success with great potential to expand in the region.”

Colin is the proprietor of Luxury Lakes Hotels and is an active committee member of the Lakes Hospitality Association and Cumbria Tourism. He also owns GT Car Tours, which specialises in luxury car tours and driving experiences across Europe.

Food Business News - Wearside based Gin distributor House of Ruhr has won silver medals at the 4th London Spirits Competition. The medals are an ultimate endorsement in the global spirits industry. House of Ruhr s Bergmann, Renton and Vogel gins scored highly in the three judging categories of quality, value and packaging.

Food Business News - Cookery School at Little Portland Street are offering a scholarship place, free of charge, on their Cook s Certificate in Food and Wine, for someone with a...

Food Business News - The new menu will focus on relaxed al fresco dining from April 12, 2021, with a selection of wood-fired pizzas freshly cooked in the outdoor oven and authentic BBQ classics.

Socially Distanced is on Menu for Good Fry Day

Food Business News - The team at the award-winning Harbour View Fish and Chip Takeaway in Seaton Sluice have already taken the necessary COVID related steps to ensure that their staff and customers are safe when collecting their fish and chips, but now they have gone the extra mile for Easter.

Food Business News - One year on from being forced to close its doors due to coronavirus, a local pub is reflecting on how it has utilised the lockdown period to overhaul the way they do business and to give back to the local community.

Food Business News - The brainchild of chef Ed Shaerf, north-west based Feast brings fine restaurant dining to outside events, private dinners, weddings and Bar amp Bat Mitzvahs right across the country. He offers an impressive track record, having worked with some of the best chefs in the UK including Gordon Ramsay and Simon Rogan.