Danbro - taking on the mighty Tor on tour at Lytham Festival 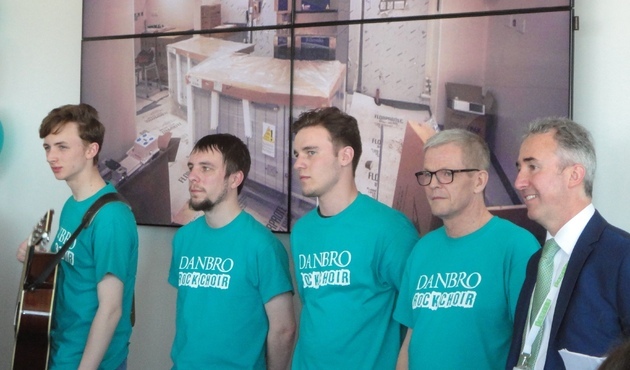 Music lovers are more likely to go Scouting for Girls than looking for accountants at Lytham Festival in August.
But there's no missing Danbro  Accounting for Life  - the multi award winning Lytham based chartered management accountants are sponsoring the eagerly awaited festival which has grown out of Lytham Proms, the inspired vision of entrepreneurs Cuffe & Taylor, into a week long celebration of music, comedy, words and much more... and which attracts bookings from across the world. More info on the festival at  http://www.lythamfestival.com
But no one was banking on sponsors Danbro joining the bill toppers for anything more than a glass of Champagne and a few words.
Especially when you bear in mind the bill - and this isn't an exhaustive list - includes Billy Ocean, Rae Morris (the fast rising talent from the Fylde coast who was discovered by BBC Lancashire's Sean McGinty), Faithless, McBusted, Elaine Paige, Marti Pellow,  Scouting for Girls, Jonathan Fantoine, Tenors of Rock and  now – drum roll, please – Danbro.
Yo! Danbro? No, it’s not the latest boy band –  for starters, they get their tax right – but Lancashire’s Lytham-based chartered management accountants Danbro http://www.danbro.co.uk   are not only sponsoring Lytham Festival,  they’re playing it.
And they're taking on the mighty Tor - just ahead of their London Hippodrome appearance and mid preparations for their debut album which which will include the Dire Straits classic Brothers in Arm which  won them global acclaim.
Danbro Rock Choir and band have a full 20 minute support slot booked  with the Tenors of Rock on Monday August 3 at Lowther Pavilion.
The choir will  also perform with TOR  during their  performance – one song choice yet to be confirmed.
And they’re singing on the main Arena stage at Lytham Festival on the Last Night of the Proms – complete with full orchestral backing. And likely to make another special appearance with a big name star or stars ... watch that space, indeed.
The choir, made up of  employees and family members, now hopes to recruit more staff and also members of associated companies within the 77k sq ft Jubilee House to swell ranks ahead of the festival (August 2-9).  Which could explain why so many co-workers and start-up businesses interested in moving in are currently avoiding eye contact with the man behind it all managing director Damian Broughton.
The choir made its debut before an audience of hundreds of invited guests at the official opening of new HQ Jubilee House earlier this year and also performed at this month's family day which gave up to 200 employees the chance to show off their workplace to friends and relatives.
Danbro Rock Choir will also perform a number of their favourite songs on Saturday, June 27, at Lytham Hall from 4pm.
MD Damian - who's got a good tenor voice - teamed up with accomplished  musician Ian Hooper and choir master Di Healey of GB Music Events/Harmony in  Business http://www.gbmusicevents.co.uk to get the choir on the road - albeit less than a mile away...
Damian admits: “I’ve always liked to sing and this is a great way to do so in company – rather than face the taunts of the family.  Besides, we’ve got most of them involved too.   And it’s surprising how far we’ve come in a relatively short time.  It’s a great way of relaxing after a  busy working day and to get  the opportunity to perform at Lytham  Festival ... which has become a real crowd puller nationally ... well, there’s plenty of pressure but it’s going to be fantastic.”
There are also plans to cut a charity single.
The Fylde company has plenty to make a song and dance about -  Danbro is also in the running for the Business of the Year and Employer of the Year in the  BIBAs  http://www.thebibas.co.uk awards, run by the North West and Western Lancashire Chamber of Commerce, and hailed as ‘the one they all want to win.’
For more info visit: http://danbrorockchoir.weebly.com and to see and hear the choir in action at their first public performance visit: https://www.youtube.com/watch?v=NOy_WicsPn0