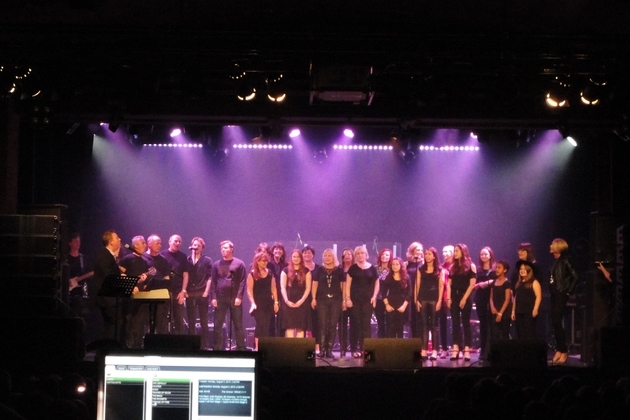 Dantastic!
When it comes to a sponsorship deal Danbro like to get stuck in.
And that goes way beyond the VIP marquee on Lytham Green right now for the weeklong Lytham Festival hosted by Cuffe & Taylor.
Take last night. Danbro rock choir opened the concert for Tenors of Rock -  who stole the show when they played Last Night of the Proms last year.
There's a local lad fronting that line up. He was backstage last night encouraging the choir and wondering whether they would all fit on stage.
There was a local girl on that stage the night before - for the opening of the festival. Rae Morris, no less, a cross between Kate Bush and an operatic coloratura when it comes to her vocal range, tipped for super stardom, and already taking Europe by storm.
Sponsored by ... well, you-know-who.
Now, with the best will in the world, a choir of accountants isn't going to put bottoms on seats but after last night's show - they may well do so. In their own right.
Danbro's opening set, devised and designed by Ian Hooper of GB Music Events, who also presented some of the younger finds of his Up-Beat Rock Academy,  was quite simply - superb.
Few signs of nerves backstage or front of house.  And Damian Broughton, managing director, the orchestrator of the choir in the sense that he brokered the partnership with veteran musician Hooper, even managed to look effortlessly cool - until photo bombed by his mate Phil backstage.
And if you missed them last night  the Danbro rock choir will be back, in the main Festival Arena to boot, right there on the Grene, for Sunday's Last Night of the Proms - the one headlined by Elaine Page and Marti Pellow.  We can't tell you what. Or when. Or with whom. But at least they don't have to learn to sing in Italian.
Danbro rocked Lytham last night with a 35 strong choir which included several young members of local charity Aspired Futures.
Effectively it went way beyond warm up for the mighty TOR - and turned out to be one heck of a good support act.
Who's next?  Well, the line up for the concerts - and don't forget there's comedy and jazz and literature and lots more beside - incudes Rebecca Ferguson, McBusted, Faithless, Elaine Page, Marti Pellow, Chicane, East 17 and many more. Including the one and only Chesney Hawkes.
But try to catch the one and only Danbro Rock Choir on Sunday. Better still follow this link and check out what happened backstage after the community 'pop up' choir were recruited by Ian  and Danbro choristers! https://youtu.be/W7bd997Pwnw
visit http://www.danbro.co.uk for a daily Danbro@Lytham Festival picture gallery

Finance Business News - Like many couples, the pandemic made Howard and Sylvia Glass from Manchester reassess their priorities.

Finance Business News - Cheshire based Clarion Wealth Planning has appointed a new compliance director to enhance the company s dedication to its clients.

Finance Business News - Credit Unions across Greater Manchester held an awareness campaign to start a conversation with members of the public about their financial wellbeing.

Finance Business News - Local business Research and Development Specialists Ltd RDS is calling all Altrincham limited businesses to attend its informative evening in which it will help de-jargon the complexities of the HMRC s R amp D tax incentive.