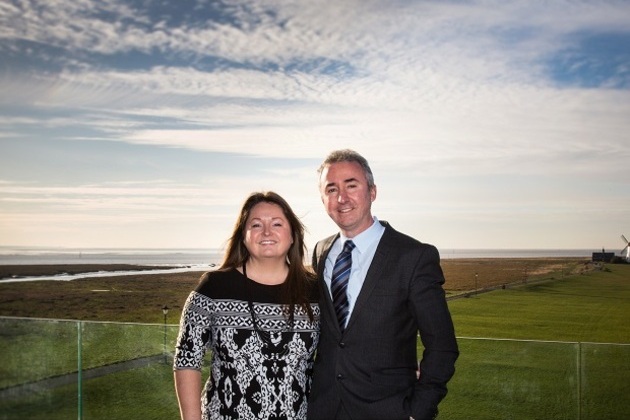 When Helen and Damian Broughton (pictured) married at the tiny church next door to what is now known as Jubilee House, Lytham, they had no idea  that years later they would say "I do" to the neighbouring 77,000 sq ft 1960s former Land Registry building too.

Jubilee House has been transformed from the 1960s concrete-clad former Land Registry's Birkenhead House which became semi-derelict while it languished empty - after the site closed following a merger with the Fylde office (at Warton) in 2006. It now has an additional floor and balconies with natural light floods throughout.

The husband and wife set up their accountancy business Danbro (named after son Daniel)  in the  6' x 6' box room of their family home in Warton (near Bae Systems) in 1999 but is now one of the fastest growing businesses in Britain:  200 staff, 8000 clients across the UK, £225m turnover  currently. It is out to more than double that in the next five years (500 staff, 16k clients, £500m turnover).  It already has an office in the City. MD Damian's declared aim is for Danbro to become a £1bn company.

Danbro has recently been named Employer of the Year (Red Rose/Lancashire Business View Awards) and been listed in the Telegraph's 1000 Most Inspirational Businesses for the second year running based on turnover, growth, social media and other factors.  It  was recently ranked in both the Ward Hadaway/MEN Fastest 50 (Greater Manchester) and NW Business Insider Growth 50. It chalked up the Sunday Times Fast Track four years running. It has retained Investors in People gold.

And with Lancashire, one of the cradles of the Industrial Revolution, keen to play its role in the much vaunted 'northern powerhouse' , Danbro shows just what can be achieved with hard work, vision and integrity.