Last Night of the Proms with Danbro 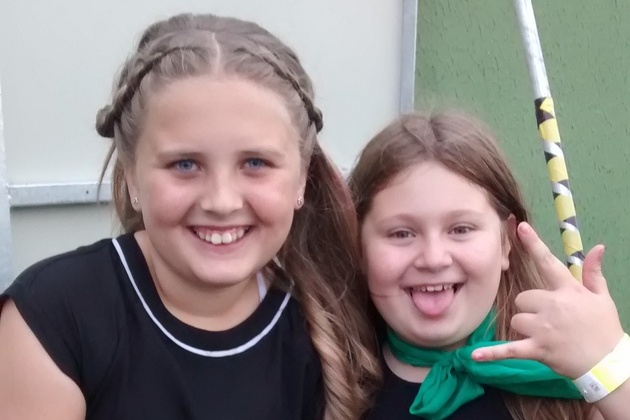 Were you there? At Lytham Festival?
If so - share...
Social media was still buzzing after the week long Danbro-sponsored Lytham Festival presented by Cuffe and Taylor ended with Last Night of the Proms.
Featuring Elaine Paige, Marti Pellow,  the Tootsie Rollers,  AJ Brown,  Jonathan Antoine, Laura Wright and ... the Danbro Rock Choir. Including the two girls pictured - from Danbro's extended family clan.
Along with several score concert goers - who volunteered to join Danbro Accounting's choir on stage.
The balloon literally went up.  Each of the company's 30 or so choristers was tagged with a balloon to make them highly visible.
Indeed it could even explain why the RAF Falcons parachute display team made for the choristers shortly after dropping in on the main Arena.
Not that we're complaining.
Ian Hooper, of GB Music Events and Up-Beat Rock Academy,  who put the Danbro choir together after Danbro Accounting's MD Damian Broughton gave him the go-ahead (and led by example), appealed for singers for a 'pop up' choir to join Danbro and the stars on stage.
Even he was surprised by the rush:"A sea of faces swept towards me and past - to the Danbro choristers."
In the event he ended up over subscribed.  The choir featured well over 80 members - and scores more had to be turned away.
Ian dubbed them the 20 minute choir - it took around that long to teach them the words and melody of the Brindisi- drinking song - from Verdi's La Traviata.
It meant, of course, that many missed what was happening on stage but who would pass up a chance to pass the dressing room of Messrs Pellow, Brown, Antoine and co, or brag on social media that they were stood between the Tootsie Rollers and  lovely Laura Wright.
Let alone get to chat to many of them later - and win the collective praise of Laura and Jonathan.  Laura thought they were fantastic - and Jonathan, who has a formidable fan base,  hailed them as 'marvellous' and 'much better' than his own debut public performance.
For Danbro the appearance with the pop up choir was the first of two performances - and it went down a storm with the audience, stomping their appreciation, and cheering the first timers, and the sponsors, on.
However, it was Last Night of the Proms and that means fireworks and flag waving.
And for Danbro rock choir it meant being on stage for the traditional highlight and finale - Land of Hope and Glory.
This is not just sponsorship, this is Danbro sponsorship. Public engagement at its very best.
As Helen Broughton, company co-founder and director of people and standards, observed as the evening ended: "It has brought brought the company and the community much closer together. We are part of Lytham now. It's family."
*www.danbro.co.uk