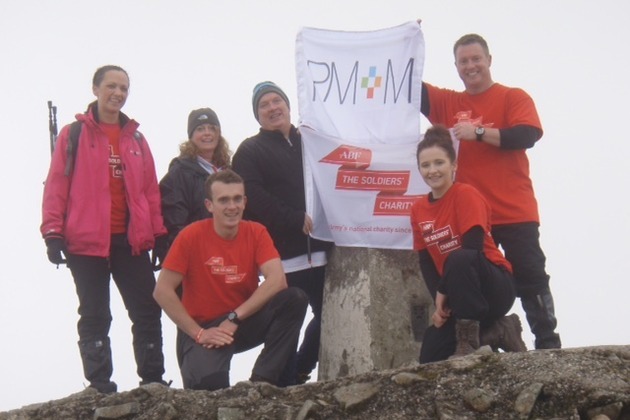 Blackburn & Burnley based PM+M is pleased to confirm that Jackie Fisher – who is a partner in the firm’s Run My Business division – this weekend successfully completed a charity climb to the top of Ben Nevis. This was the last of the UK’s three highest peaks that she had left to conquer. Jackie’s expedition group included her husband Rob, her son Scott as well as some friends and business associates. So far they’ve raised over £1,400.00 for ABF The Soldier’s Charity.

ABF is a charity that is close to Jackie and Rob’s hearts as it offers lifetime support to serving and retired soldiers and their families. The charity has an office at Fulwood Barracks in Preston and the local team there provided t-shirts for the climb along with other goodies - including a flag - which Jackie proudly showed off at the summit!

Jackie said: “We were delighted to reach the summit and the climb was most certainly a challenge. However, raising money for a charity that we believe in so passionately was our inspiration and that really helped to get us to the top.”

It’s also not too late to donate as you can pledge any amount (no matter how big or small!) via their Just Giving Page.

Finance Business News - A new apprentice has boosted the ranks of a West Lancashire based Independent Financial Adviser IFA . Arie Hogendoorn is the latest addition to Acumen Financial Partnership s established apprenticeship programme and brings the company s headcount to 21.

Finance Business News - Eight Greater Manchester credit unions - who all form part of the SoundPound consortium - have joined forces to launch a new campaign - HowsYourBalance CreditUnionAwareness - asking members of the public to take part in a balancing act challenge to start a conversation about their financial well being.

How one organisation is helping their clients to navigate Inheritance Tax

Finance Business News - The inescapable truth of life though is that we must take our final journey at some stage and our families will be left to deal with the aftermath, which will include the financial side of life.