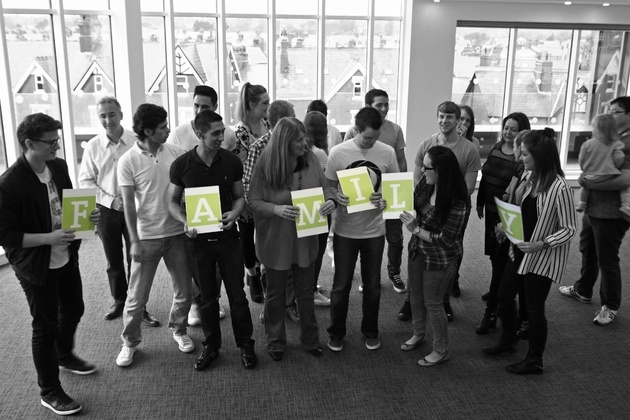 Some businesses are family run. Others run families.
Take Lytham based accountants Danbro. They have plenty to celebrate on International Family Day – Friday (May 15).
The Danbro group has reached the milestone figure of 200 employees since the recent acquisition of a competitor in London where Danbro already has an office.
Closer to home 180 staff work under the vast roof at the company’s swish newlook Jubilee House HQ overlooking the Green and Estuary in leafy Lytham.
And these number crunchers are a close knit clan - even if the rest of us lose count after 30 (and rising) family members.
‘Family’ is more than just an internal value of the group to feature alongside 'integrity'  'dynamic' 'respect' and other cherished strengths and ethics. It was the very bedrock on which the business was built 15 years ago by Damian and Helen Broughton.Longest serving employee Sharon Oldham – Helen’s aunt – who recently officially opened Jubilee House (as featured in North West FYI) started working for Danbro when her children were at school.Today two of her daughters work at Danbro.
Co-founder Helen, director of people and standards, works with three of her brothers.  Chris Rhodes heads umbrella services,  Andrew’s in charge of maintaining the 77k sq ft complex, and Wilfred,  17 and the youngest, is the unflappable accounts assistant who told PM David Cameron all about Danbro when they met at an apprenticeship event at Warton pre-Election.
At least four other extended clans work within the 66k sq ft of office space.
HR manager Rhianna Weedon – whose other half also works there - says family values run deep.
“At the last count we had six married couples, five sets of love birds and 27 employees directly related to each other,” she explains.
Helen explains: “We don’t set out to find family but family finds its way here – and not just ours; we adopt others so they don’t feel left out!
“Current family members from my side include one aunty, three cousins and three brothers – I’m big sis so have always been the boss!
“My PA is my cousin Alison (Sayle).
“We have a growing number of family groups. People love to work here and share the love with family members. We’re at the point, 15 years on, where sons and daughters are following in father’s or mother’s footsteps.
“It’s great. Family keeps you grounded. They say it like it is – although it means you can never pretend to be working late unless you really are!
“Family’s loyal too. You don’t want to let your family down. Our biggest challenge is not boring others when we get together to talk.
“Having family around makes me feel safe. They’re the ones you can really count on - and actually take advantage of - when you need extra help!”
Danbro’s founding ‘fathers’ are predominantly Broughtons, Rhodes and Oldhams  (nine) but the Swift/Fothergill family is catching up (six), along with three Greens,  three Browns and permutations on other family' fortunates.'
Accountants Patrick and Johnny Brown, both in their 20s, followed their father, former international aid worker and teacher Michael, into the business. One tried work experience there, the other switched from engineering. Johnny explains: “There’s nothing boring about accountancy, Danbro’s a great company and really going places.”
Like many of the family members sisters Lauren, 20, and Bethany Lockett, 22, work in different departments but love meeting up for lunch – “depending on who’s paying,” adds Bethany.
Laura Green, 22, followed father John into the business. Chelsea O’Brien, 20, works with stepmum Nicole.
One big cluster group includes finance director Glenn Swift who’s worked with Danbro for eight years, wife Jackie (customer service), son Glenn (HR) and partner Craig Doyle (IT manager), Jackie’s sister Julie Fothergill (senior sales ledger clerk) and her son Marcus (accountant).
Craig confides there’s one distinct advantage to working with family. “It means you can always get a lift to work”
Danbro provides accountancy, umbrella, business and financial services to 8000 clients, contractors and agency workers across the country and plans to more than double staff, clients and turnover (currently £225m) within five years.
MD Damian Broughton, the driving force behind the 2020 vision, concludes: “We call it the Danbro Family because it’s grown with us and this fantastic team shares our passion for excellence, customer care and service above all else – and cares enough to want to make a difference with the community.”
As for the family member who lent his name to the business, Helen and Damian’s son Daniel, now 17?
Damian chuckles. “He likes to say we owe it all to him - but he doesn’t want to come into the business.”
*   Danbro is planning a special family day in June for staff and family members to celebrate after the official opening of Jubilee House last month.

FAMILY VALUES FACT FILE
·         The Institute for Family Business reckons there are around three million family firms in the UK. Family businesses account for almost 70 per cent of the UK’s small and medium sized enterprises. A report by Oxford Economics claims they generate work for nine million people – around 40 per cent of total private sector employment.

·         Specialist researchers at the University of Wolverhampton warn family businesses to factor in a 20 year strategy to train up the next generation to ensure a smooth hand over. The study highlights key family strengths as trust and flexibility but cautions against clashes over pay and sense of entitlement.

·          International Day of Families has been observed globally since the United Nations declared 1994 the international year of the family. The annual event reflects action taken to stabilise families in all cultures. This year’s theme is gender equality, a better deal for children, and an end to violence in the home, extended family or community.
http://www.danbro.co.uk