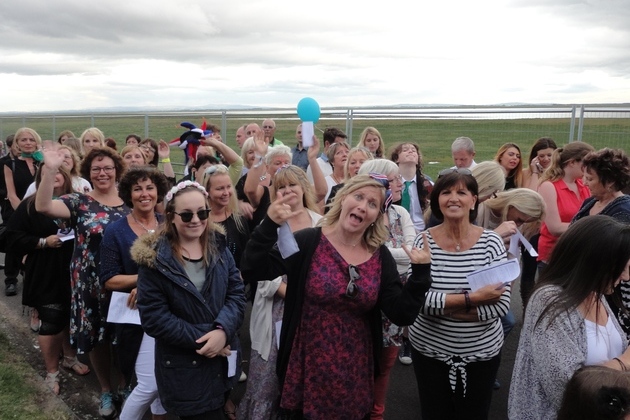 More than 60,000 visitors packed out the 'Proms' for the final weekend of Lytham Festival, it has been confirmed.
The Danbro-sponsored festival, hosted by Cuffe & Taylor, and now in its sixth year, helped boost spending in the town Danbro Accounting now call home by £214m.
More than 100,000 people packed into Lancashire's wealthiest town for two key events - some 60,000 for Lytham Festival's traditional 'Proms' and a further 40,000 for the 1940s themed Wartime Festival that followed.
Lytham Festival is now Lancashire's largest musical festival.  This year's event included three appearances by Danbro's own Rock Choir trained by staff from GB Music Events which establishes corporate and community choirs and runs 'rock' academies for kids - and parents!
Choristers from across the Danbro Group and friends opened the set for Tenors of Rock on the second night of the week long festival. They returned for Last Night of the Proms to join a pop-up choir (pictured above while waiting to go on stage) recruited from members of the vast audience to sing with Jonathan Antoine the 'drinking song' from Verdi's La Traviata, Choristers were each allocated two members of the audience to assist.   The company choir later returned in triumph to join Jonathan and stunning soprano Laura Wright for the traditional end to the Proms 'proper' - Land of Hope and Glory complete with fireworks.
The Wartime Weekend is also one of the biggest of its kind in Britain, according to Fylde tourism chiefs and, this year, the event coincided with the VJ Day commemorations which meant even more interest, and visitors.
Six per cent of Fylde borough's economy is tourism-related effectively meaning both festivals  helped support amost 2,200 jobs in the resort wholly or partly related to tourism. The figures were revealed in the latest Marketing Lancashire research.
Bosses at Danbro are out to crunch some numbers themselves.
They hope to almost double turnover from £225m to £500m in the next four years.They also aim to take the client base from 8000 to 15000 and boost staff numbers from 210 (which includes a recent acquisition) to 300-350.
It all adds up to good news for the local and indeed national economy. They also have two bases in London.
Helen Broughton, director of people and standards and co-founder with husband Damian of the Danbro Group, says: "We are thrilled and delighted to have played our part in Lytham Festival. It was our way of saying thank you to the community of Lytham for making us feel so very welcome since we relocated here."
Danbro announced their  2020 vision of sustained growth shortly after moving into the 66k sq ft  Jubilee House over Christmas and earlier this year. The company assist  the contractor-contigent-self employed workforce and other businesses big and small including social enterprises and community interest concerns.
"When we started out Damian worked as a contractor himself.   We know what it's like to be self employed.  And if we can give others a helping hand we will."
To that end Danbro have also created a hot desk hub, with incubator units/offices on part of the ground floor of Jubilee House to assist  those needing access to such, who might otherwise work from home, cafes or community centres. It has ready access to the coffee shop  run by Brothers of Charity and other facilities.
"It's the sort of base I'd have loved when working as a contractor myself," Damian admits. "You can't beat the location, the views are spectacular - and it's handy for an accountant if you need one!"