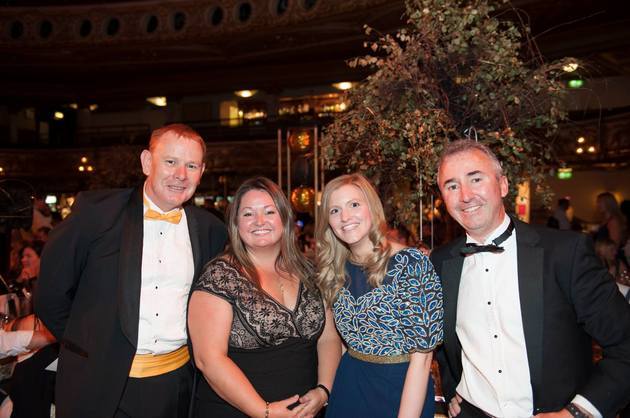 They say three's a crowd...
Well, actually they say three's a crowdstorm today.
The much prized BIBA award for Business of the Year - the one they all want to win - is now on proud display in  reception at Jubilee House, on the edge of Lytham Green... where it has been lovingly polished free of fingerprints of 210 workers!
Drop in some time and say hello. And to her  two older sisters, who have had pride of place in an increasingly crowded trophy cabinet since 2011, when Lytham based Danbro Accounting http://www.danbro.co.uk pulled off the double at the BIBAs - Business of the Year and, drum roll please, Employer of the Year.
This year they bagged the big one again.
The Be Inspired Business Awards http://www.thebibas.co.uk are  hailed as the Ones They All Want to Win and it's no wonder because the award ceremony itself is one of the best in Britain - and presented in that glorious testimony to the spirit of enterprise which built Blackpool as a resort. Blackpool Tower.
Even that stately dowager got pressed into doing That bend this year - thanks to the creative flair of the team at Danbro's marketing and design team.
The BIBAs bend has really caught on and whoever thought of it in the first place deserves a social media medal for services above and beyond.
Contenders attempt to emulate the graceful pose of the Oscars-like BIBA statuette - with varying degrees of success.
The #bibasbend went viral this year and with good cause - because it captures the spirit of those awards.
They are fun, they are flamboyant, and they show off the best and brightest businesses in the corner of the region covered by the North and Western Lancashire Chamber of Commerce - one of the most inspirational commercial forces of its kind in the country.
Lancashire based Danbro, the specialist accountancy firm for contract, freelance and temporary workers, as well as offering a raft of accountancy and allied services to others, beat off stiff competition to shine at this year’s BIBAs awards at a glittering spectacle hosted by TV celebrity Stephanie Beecham. Yup - that Stephanie .. of Dynasty and Coronation Street fame. Although we put Corrie first here in Lancashire.
Danbro won the prestigious accolade ahead of seven other high profile contenders, Chemical Innovations, Cleanall Services, Conlon Construction, Gold Medal Travel Group, Scorpion Automotive, Springhill Care and Warden Construction.
The company was also up for Employer of the Year – which went to Gold Medal Travel Group.
The very names of the businesses involved - and so many more - show the sheer diversity of not just these awards but the economy and enterprise of what is actually (and has long been) a cradle of the northern powerhouse long before it was labelled such.
Just as you look to Lancashire for the industrial past which shaped so many of our towns and cities and reached far beyond the old county palatine's borders the future's  bright too.
Danbro built success on identifying a niche market back in 1999 when the freelance economy was emerging as a force with which to be reckoned - and it remains the fastest growing sector of employment for all those legislative efforts to hobble the mobility of that workforce.
Danbro managing director Damian Broughton and wife Helen, director of people and standards, co-founded Danbro in the box room of their then family home at Warton before converting their garage into an office space for two, three at a squeeze.  Their first 'proper' office was a former building society on the high street at Kirkham, then they built a unit at Whitehills Business Park before moving into another and - the rest of history.
Today Jubilee House, all 66k sq ft of it, on the edge of Lytham Green, opens windows on a world of opportunities - including for others because there's a suite of incubator units and a hot desk hub on the ground floor for rental by others.  Blackpool's Street Angels have already moved in there.  They say it will take their voluntary service - a potential lifesaver in the resort's night time economy - to the 'next level'.
And while Danbro may have polished off another title and trophy to add to the rest - including the Red Rose Employer of the Year award this year - the couple who run the £225m turnover business know who the real winners are.  Their staff. Or as they put it the Danbro Family.
MD Damian admits: "To be crowned Business of the Year for Lancashire is not only a great honour for all at our Company, but is also a great recognition of the hard work that all the team have given. We have continued to invest in our workforce, in our customer service initiatives and in our systems. The investment has paid off.  Our success boils down to the hard work that everyone puts in at Danbro. We continually strive to improve what we do as a business – and employer.”
And Helen adds: "To be recognised as the best by the judges is a massive achievement and we are all very proud. Damian and I want to thank our Danbro family as none of this is possible without them!”
And best of all those BIBAs pack a real punchline. The winners are automatically enrolled in the BIBAs winners' academy - the Hogwarts of high enterprise where the real magic happens in masterclasses with some of the best known names in business ... any business.
Here's to next year...

* Pictured: Tony Raynor of Abbey Telecom, one of the BIBAs judges, Helen Broughton, Danbro director of people and standards, Katie Allen, group operations director - who came to Danbro as a 'temp' two years ago  - and MD Damian Broughton.