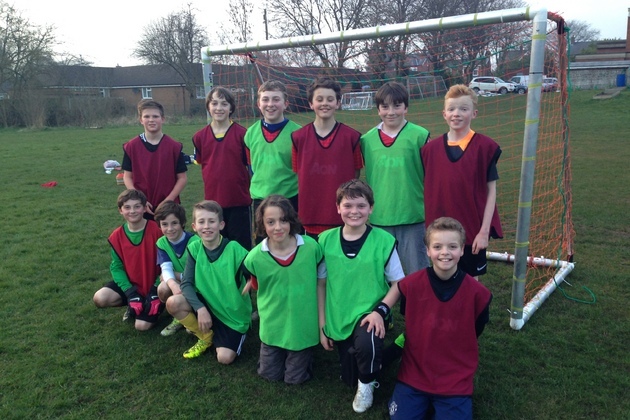 The Holmes Chapel Hurricanes under 12s team received a grant through The MBNA Foundation – the lender’s charitable giving arm – and used the money to buy six portable goalposts for the team.

Meriel Holmes from MBNA’s Business Analysts team applied for the donation on behalf of the Hurricanes, as part of a £90,000 investment into community projects from the MBNA Foundation in 2014.

She said: “The team don’t have their own training ground at the moment and have been practicing at a local school so this is the first step towards new facilities.

“The coaches encourage values like teamwork and fairness between the boys so it’s a great club for youngsters to be part of. They’re at the age now where they are learning life skills on a day-to-day basis and hopefully these can be taken from the field and applied to other areas of their lives.”

Simon Lincoln, Joint Manager of Holmes Chapel Hurricanes, said: "On behalf of the team we want to thank the MBNA Foundation. The grant has made a huge difference to team morale and we have been using the goalposts at training every week.

“We have already seen a difference in our small sided games which is transferring onto the pitch on match day. All the boys were overwhelmed when they saw the goals and it’s much easier to train champions with the latest equipment - they’re now working towards being the Messi or Ronaldo of Holmes Chapel!”

In addition to the community grants, the MBNA Foundation has also supplied funding for 120 schools across the North West and North Wales, which have already received a share of around £500,000 to fund ideas that enhance children’s learning environments and promote education.

For more information about MBNA or the work of The MBNA Foundation, visit www.mbna.co.uk

How Retail SMEs Can Transform Their Finance Department After a Pandemic

Finance Business News - Financial adversity is at the forefront of many retail SME leaders agenda.

Finance Business News - Savings and loans provider Manchester Credit Union has reached a milestone of 12.5million savings by its Mancunian members as it celebrates its 30th anniversary.

5 Types of Investments That Will Help Fund Your SME

Finance Business News - Entering a flash recession, with signals the UK economy is already on the recovery following the financial difficulties of the coronavirus pandemic, there s never been a more important time to secure additional investment for SMEs to help continue growth for their business.

Finance Business News - MMA founder Martin Bown initially set up the group, that meets once a week via Zoom, in March 2020 to offer free financial advice to firms during the pandemic. The network really took off and at the height of the first lockdown, around 30 business owners dialled in to access advice and talk through their concerns.

New book teaches businesses how to profit and grow

Finance Business News - The Profit Mindset aims to give small to medium size businesses the four basic principles of how to get to grips with the finance side of their business to help them become more profitable even during the current economic crisis.

Perils of Efficiency Procuring Supplies During a Crisis

Finance Business News - Although lockdown has hit many industries across the world, some businesses have managed to remain somewhat operational, with supply and demand still existing for some products and services.