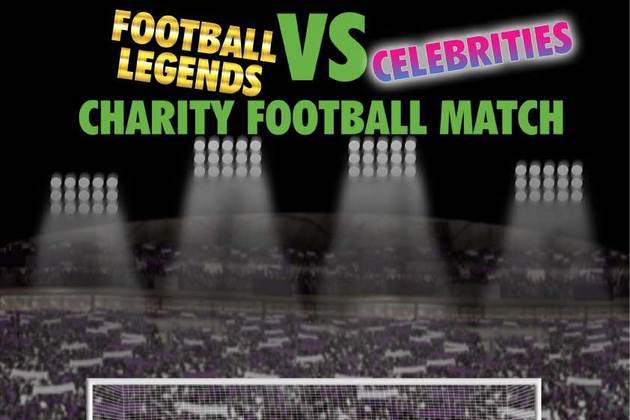 The event will take place on Sunday 11th May 2014 from midday and the match will kick-off at 1pm when the team of football legends will don their boots and take on the celebrity challengers.

Some of the confirmed players include former Manchester United stars Clayton Blackmore, Lee Martin (a patron of the charity), Danny Higginbotham, as well as former Manchester City keeper, Eric Nixon, and the celebrities include Hollyoaks star Keith Rice, who plays Finn O'Connor, former Apprentice candidate Neil Clough, as well as BBC Radio Manchester’s Mike Sweeney, to name but a few. Manchester United stadium announcer Alan Keegan will be returning to compere the event for us – keeping the crowds entertained!

Popstar Anthony Kavanagh will also be performing his hit song ‘I can make you feel good’ and there will be lots of activities for all the family including half time entertainment, competitions and activities as well as a raffle, and the charity mascot, Little M, will even be making an appearance!

In the lead up to the game there will also be an interschool drawing competition with two winners getting to walk out onto the pitch with the players and charity mascot. The two winners, each accompanied by three of their selected friends, will then be invited to take part in a half time penalty shoot-out against the charity mascot. Any schools, local sports clubs or charities wishing to take part and find out more about raising funds for their cause should contact the charity.

The Moore Foundation is a charitable trust based in Cheshire and provides financial and practical relief to local children’s charities and worthy causes. The Foundation was established in 2005 when it was noted that suitable funding was slow to reach the smaller charitable organisations in the region, as well as many disadvantaged and disabled children being found to have unsuitable support equipment and treatment.

Tickets for the football match are priced at £5 per adult and £2.50 per child or £12 for 2 adults and 2 children. Tickets can be purchased online via http://moorefootballmatch.eventbrite.co.uk by emailing events@moorefinance.com, calling 0845 094 0373 or on the gate.

Additional VIP tickets will also be on sale for an after match celebration, giving spectators the opportunity to meet some of the stars face to face and enjoy a light meal. These tickets are available by contacting the charity.

“We can’t wait to bring our fundraiser back to Altrincham FC again. We’ve got some fabulous support from some well known football legends and celebrities as well as local companies and entertainment providers. There’s going to be a real family fun atmosphere and we hope that many of our beneficiaries will be able to attend too.”