Have you heard about the new dance craze? 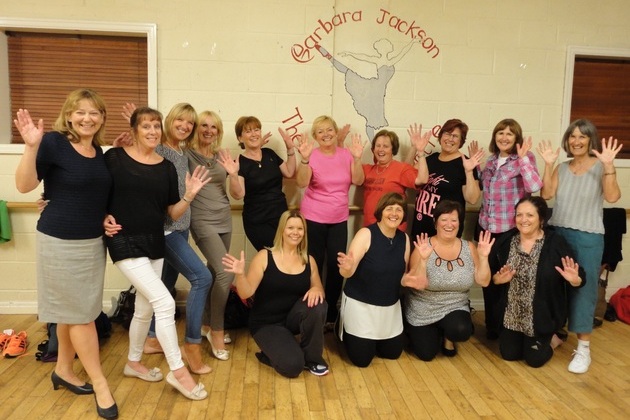 What do burgers, epic bike rides, sky dives, 70s style disco dancing , glam rock, several chefs and a certain seafront attraction have in common?
Cash Quest 4 Carers, the three month corporate challenge to fund the next Young Carers Champion for Blackpool, is gathering pace.
Twenty four teams are battling to raise awareness and cash for Carers Trust Fylde Coast ahead of the awards ceremony on October 16 - coinciding with Britain's Best Breakfast day, the national Carers Trust campaign of which the resort centre is a network partner.
Here are some are some of the highlights to date:
Blackpool's Goalden Girls: a team of charitably minded ladies over 50 and in some cases 60 already run marathons and take on epic walking challenges to keep fit and raise funds. But have you heard about their new dance craze? After the success of going Gangnam at Funny Girls last year and narrowly missing out on the most innovative fundraiser award they are following through with a 70s style  flash mob dance at a high profile local venue - the location of which must remain a secret. But it all happens on September 11. And they hope to be in the money in every sense.
The girls are training at Barbara Jackson's dance school at Farmer Parrs, Thornton under dance teacher Donna White who is delighted at the progress her pupils have made - especially in platform heels!
“They’re a pleasure to teach, such lovely ladies and so willing to learn … and they listen!” said Donna. “I think they’re going to be absolutely amazing to watch.”
The Imperial Hotel, Blackpool:  Caring staff supported CQ4C last year with  a job swop between general manager Alison Gilmore and the head of maintenance and other events. This year they have recruited caring chefs to produce a yummy carers' platter - with a share of the cover price going to the carers charity.  The hotel is also hosting a children's party on August 30.
Master butcher Nigel Wilkinson: Nigel, of North Shore, is married to one of the Goalden Girls, Hilary, and shares her passion for the carers charity. Last year his carers' banger, a traditional  pork sausage recipe tweaked for the charity, bagged the most innovative fundraiser award.  This year he's back with a bang - and the bangers but also a brand new carers recipe, the Ice Cold Chef Carers Burger, this time devised in conjunction with fellow CQ4C contestant John Joyce,  adult carer of the year and the self styled Ice Cold Chef after being taught to cook - with a can of his favourite brew to hand.
Once again a share of the banger and burger sales will go to the charity.  Nigel has also assisted with John''s #cookerysos workshops for young and older carers - providing food to prepare into meals. "It's a great partnership\" Nigel admits. "We're like a couple of naughty schoolboys when we get together  - but the feedback from customers is great."
Ice Cold Chef John Joyce: rising social media star John Joyce is still a full time council worker but also manages to care for wife Bev, who was diagnosed with multiple sclerosis eight years ago. She taught him to cook and now he's teaching others and publishes his own cookery book this month. The Ice Cold Chef’s #CookerySOS  (Kissed Off Creations)  includes simple and nutritious recipes specifically designed for carers and others who may not have time to cook well, let alone eat well. A healthy slice of the profits, around £2.50 from the £15 cover price, will go to the cash quest, and the same amount to the MS Society.  Nat Ballard, the design guru who has turned John’s dream to reality, says: ““The story behind this book is positivity in the most difficult of circumstances, and this point has only been reached with a lot of support for John and his mission across social media. This book is the culmination of a journey that we started with John over a year ago.” To pre-order copies follow this link: http://store.kissedoff.co.uk/product/pre-order-cookerysos-a-cookery-book-for-absolute-beginners John, the charity's adult carer of the year, is also hosting an event at his own home at the end of this month - again to raise funds for the carers charity.
Sandcastle Waterpark: last year's overall award winners are back with a splash with their own Mission Impossible team. Engineer Ian Harrison was the first to take on the challenge, completing two epic cycle rides, virtually back to back, covering 555 miles in nine days, raising £1000 for CQ4C!  "I jumped at the chance to take part, to tie in raising money with something I’m passionate about.  I hope this helps towards winning Cash Quest for Carers for the second year running!”
Other challenges include a glam rock event by local medics (led by Lorraine Tymon - who was part of the carers' award winning Hospital Team of the Year this year); a skydive (August 29 by Sarah Pennington  (c/o https://www.justgiving.com/amanda-fryer),  special event by young adult carers (August 28 at the charity's  Grenfell Avenue base), a themed charity evening at the Grosvenor G ... and more.
For an update on CQ4C events open to the general public  visit http://www.carerstrustfyldecoast.org/support-us/cash-quest-for-carers-2015/cash-quest-for-carers-2015-events  and follow @blackpoolcarers and @cashquest4carer