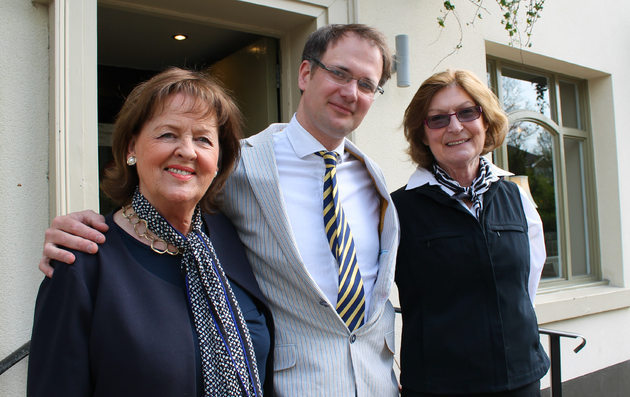 Antiques owners keen to discover the value of their collectibles, were in for a double treat when their prized heirlooms were assessed by a team of valuers from the world of television.

Charles Hanson of Derbyshire based Hansons Auctioneers, a regular on TV’s Bargain Hunt and Cash in the Attic, arrived at The Coach & Four in Wilmslow for a day of valuations recently, April 16, in aid of Francis House Children’s Hospice.

Joined by fellow Antiques Road Trip presenter and Prestbury based antiques dealer Margie Cooper, and Hansons valuer Vanessa Savage, the team shared their expertise with members of the public in return for a donation to the hospice.

Charles said: “It has been wonderful to launch our valuation event today. People curious about the significance of items handed down to them or valuables they’ve had hiding in the attic for years, have come along and not only found out what they are worth but also helped out a very worthy cause.”

Bramhall resident Alasdair Hymers, brought along a Samurai sword that had been hanging on the wall of his father’s Edinburgh home for decades.

James Hymers a former Major in the Royal Corps of Signals, died eight years ago.  When he was serving in Burma in 1945, he accepted the sword during the surrender of a Japanese town by a Japanese officer.

The sword was identified from the MEIJI period 1868-1912 and would date to circa 1885. The blade however may be as old as the 16th or 17th Century. After a valuation of between £1,500 and £2,000 Alasdair said: “It was great to meet Charles, and get an understanding of its value. The sword means a lot to me and my brothers and sisters, we’ll never part with it.”

Margaret and Bill Klieve from Mossley near Ashton-under-Lyne, brought along a Victorian silver jug on behalf of a friend.  With a rare scene of people playing curling, the jug was dated around 1872, by London maker Henry Holland and given a valuation of approximately £1,500. It will now go forward to a fine arts sale in July.

The idea for the Charity Valuation Days in Wilmslow came about after residents Louise and Robert Craft visited the Derby Auctioneers and Valuers with a fur coat owned by Robert’s mother.

Tasked with finding a Cheshire venue, the couple approached The Coach & Four, and following a meeting with Charles, a series of monthly dates were agreed.
Louise volunteers at Wilmslow library selling charity Christmas cards, she picked Francis House from one of the charities with cards for sale.  The couple were also aware of Charles and wife Rebecca’s own personal anguish when their first baby was stillborn in 2012.

Charles visited the hospice earlier in 2015, touring the hospice facilities with chief executive David Ireland.  He commented at the time: “For every family there are the rigours of daily life. But for those with a poorly child the strain is constant.  To be able to come here where they can have a peaceful and fun time, far removed from that stress for a few days is a lifeline.

Charles established Hanson Auctioneers in Etwall, Derbyshire in 2005. He manages the busy auction and value house, the venue for international sales of antique silver, jewellery, clocks and furniture.

A further 7 valuation days are planned on selected Thursdays every month until November.

Louise said: “It’s been great fun today, we’re hoping more people will come along with their antiques and collectables, learn about their history and value from a great team and support their local children’s hospice.”

Donations from the first event raised £200.

Francis House cares for over 370 sick children, teenagers and young adults with a short life expectancy. Providing support and friendship for the whole family.The hospice needs over £3.6 million in donations each year to continue to provide its services. For more information on Francis House visit francishouse.org.uk